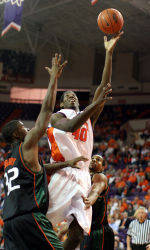 Tigers Get Back On Winning Track, 74-70, Over Miami In OT

CLEMSON, S.C. (AP) – Vernon Hamilton scored six of his 10 points in overtime to help Clemson to a 74-70 win over Miami on Wednesday night.

The Tigers (20-9, 6-9 Atlantic Coast Conference) shot just 14-of-31 from the foul line in the game, but made seven of their 10 free throws in overtime to stop a four-game losing streak and keep their faint hopes for an at-large bid to the NCAA tournament alive.

Clemson led 30-27 after a first half that saw both teams combine to hit just 1-of-9 free throws.

Clemson did not score in the final five minutes of regulation, missing six straight free throws. The Tigers had the final shot of the second half, but James Mays inside shot never hit the rim.

Mays led Clemson with 19 points and 10 rebounds, while K.C. Rivers added 14 points for the Tigers, who likely need to beat Virginia Tech on Sunday and win a couple of games in the ACC tournament to have a shot at an NCAA tournament at-large bid.