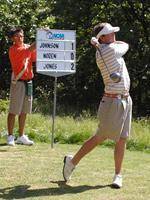 Gregg Jones and Brent Delahoussaye both finished in the top 10 individually of The Preview on Tuesday, leading Clemson to a third place finish at the 15-team event. The Preview was played at the par 70 Cascades Course at The Homestead in Hot Springs, VA. The tournament was shortened to 36 holes due to inclement weather on Monday. The NCAA championship will be held at the same course June 1-4, 2004.

Jones shot a 72 on Tuesday to finish at 141 for the 36 holes, good enough for fifth place. The course proved to be difficult for the 75 golfers, as just two players were under par for the tournament. John Poucher finished first with a two-under-par 138 total, while Kevin Silva of North Carolina was second at 139. Jones first round 69 was the only round under par by a Clemson golfer in the tournament.

Delahoussaye shot a team best 70 on Tuesday and finished with a 142 total, two-over-par and good enough for ninth. It was his first top 10 finish as a Clemson golfer.

Clemson had the lead after the first day and held a five-shot lead with nine holes to play. But, the Tigers struggled over holes 10-15. After playing the first nine holes at two under par as a team, the Tigers played the back nine in 10-over-par. Clemson went from a five-shot lead on the field, including a nine shot lead over UCLA, to three shots behind the champion Bruins, who had a two-under-par team score for the back nine.

UCLA won the event with a 572 score, 12-over-par. Georgia Tech, who had a tournament best 276 team score on Tuesday, finished second at 573. Clemson and Florida were tied for third at 575. It marked the 20th straight tournament in which Clemson has finished in at least the top three. Georgia was fifth at 577, while Augusta State was sixth at 578. UNLV, Wake Forest and North Carolina were tied for seventh at 582.

Jack Ferguson and Matt Hendrix were tied for 28th place at the tournament with 146 totals. Both players had rounds of 73 each day. Ferguson made the turn on Tuesday in two-under-par, but shot a five-over-par 40 on the back side. He was six-over-par from holes 10-15. Sophomore Brian Duncan shot a 75 on Tuesday and finished at 148 for the two days, eight-over par and tied for 38th.

Clemson will next be in action on October 3-5 at the Carpet Classic at The Farm in Dalton, GA.