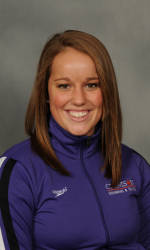 ATLANTA, GA – The Clemson men’s and women’s swimming and diving teams concluded their second day of action at the Georgia Tech Invite Saturday. Both teams maintained the third place standings among some of the top swimmers in the country.

The women started the day off strong as the relay group of Kelli Kyle, Katrina Obas, Maddie Tarantolo and Meg Anderson finished third in the 200 medley relay with a NCAA-B cut time of 1:42.58. Kyle earned another NCAA-B cut time as she finished second in the 100 backstroke with a time of 54.80.

Junior Katrina Obas also scoring in the event. Heather Savage tied for fifth in the 100 butterfly. Tarantolo set a career best time of 55.00, which also moved her into third place in Clemson history in that event.

Senior Katrina Obas scored again for the Tigers with a third place finish in the 100 breaststroke. Laura Browning took eighth and tenth respectively.

On the men’s side, the relay group of Jason Chatlosh, Kyle Shoemaker, Matt Angelini took seventh in the 400 IM, with junior David Gordon and sophomore Will Clark also scoring for the Tigers.

The Tigers will compete in the final day of competition in Atlanta on Sunday at 3:00 p.m.