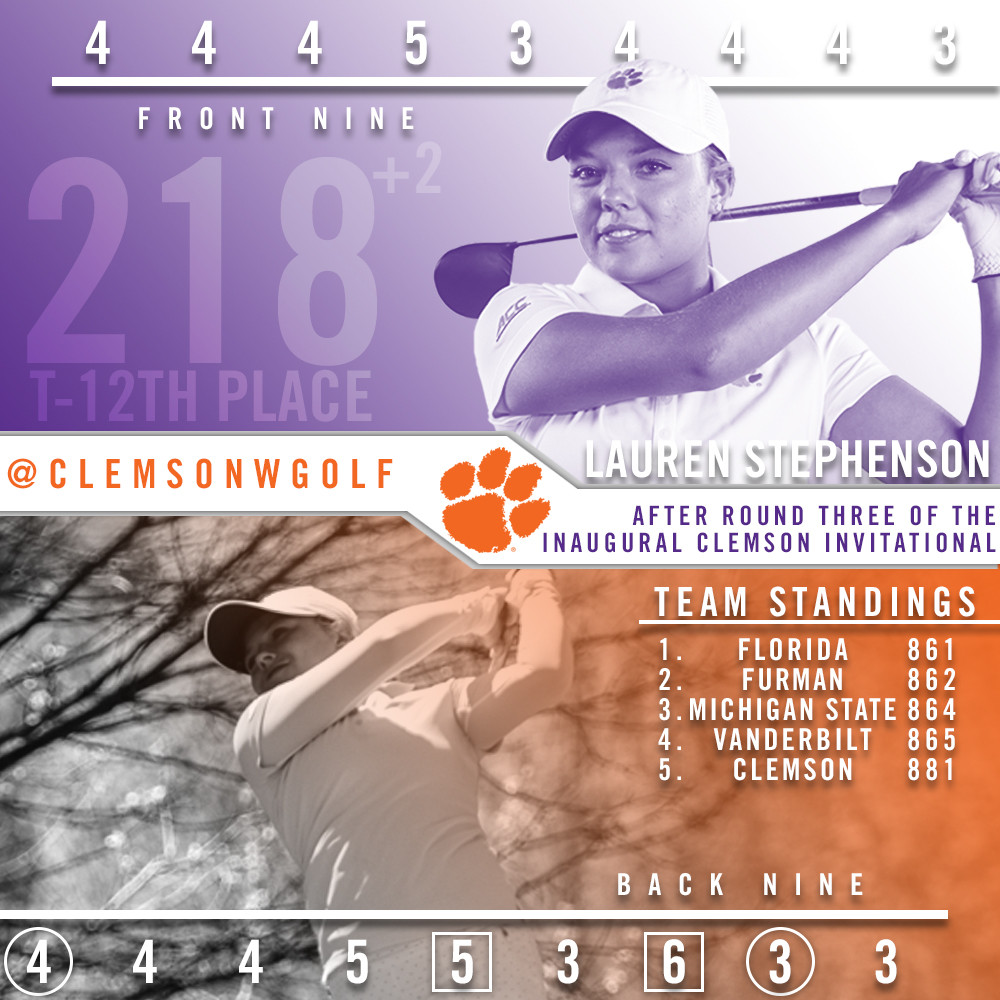 Sunset, S.C.—Freshman Alice Hewson fired a two-under-par 70 and classmate Lauren Stephenson added an even-par 72 to lead Clemson to a fifth-place finish out of 14 teams at the first Clemson Invitational at The Reserve at Lake Keowee in Sunset, S.C.   Clemson fired a three-over-par 291 team score on Sunday to improve from seventh to fifth over the final 18 holes.

Eighth-ranked Florida won the tournament with an 861 score, just one shot better than Furman and three shots better than third-place Michigan State.  Vanderbilt finished fourth with an 865 team score.

All four schools held the lead at one point or another over the last hour of the tournament.   The final round was played in a shotgun start format so all 14 teams finished at basically the same time, leading to an exciting finish.

Katie Sharp of Michigan State won medalist honors with a score of 208, eight-under-par.  She had rounds of 68-70-70.  She finished two shots better than Teresa Caballer Hernani of Augusta and Alice Chen of Furman.  Samantha Wager of champion Florida had a 211 to finish fifth.

Clemson’s fifth-place finish was one of its best of the season considering the Tigers finished ahead of 19th ranked Tennessee, 22nd ranked Texas A&M and No. 32 Houston.  Clemson beat Oklahoma by 19 shots on Sunday to move ahead of the Sooners as well.  The field included 13 of the top 100 players in the nation according to Golfweek/Sagarin.

“I am very proud of the great team effort from the ladies this week,” said Head Coach J.T.  Horton.  “What an honor it was to play in front of our home crowd.  It was also special to be able to recognize our seniors, Lauren Salazar and Taylor Ramsey, who helped this program get started.  They will be the first players to graduate from the women’s golf program.”

“I  want to thank everyone at The Reserve at Lake Keowee for their tireless efforts in making our first Clemson Invitational a success.  The work of the volunteers was so critical and we appreciate everyone that came out to support the event and our program.  We also greatly appreciate everyone on the Clemson athletic staff for their support.”

Hewson’s 70 was the best round of the tournament by a Clemson golfer.  The freshman finished with a 220 score for the 54 holes, good enough for 18th place.  She improved 15 spots in the standings with her fine effort on Sunday.

Stephenson was Clemson’s top player for the course of the tournament with a 218 score, just two-over-par.  She had symmetrical rounds of 72-74-72 to finish in a tie for 12th with Jacqueline Bendrick of Furman and Hannah Wood of Oklahoma.

Hewson and Stephenson have been quite a one-two punch for Clemson as freshmen.  They have now played 24 rounds in eight tournaments and have the exact same among of strokes (1753) for a 73.0 stroke average.

Sophomore transfer Sydney Legacy shot a 74 on Sunday, the third best of the day among Tigers and she finished third among Clemson golfers for the 54 holes with a 221 score.  Sloan Shanahan had consistent rounds of 75-76-75 to score 226 for the three rounds and finish 43rd in the individual race.  She played her second nine holes of each round in a combined three-under-par.

Marisa Messana shot a 71 in the first round and finished with 229 total, good enough for 56th individually.

Four other Tigers played in the tournament as individuals.  Jessica Hoang was the best of that group with a 223 score over three days, good enough for 31st .  She finished with a 73 on Sunday, her best round of the tournament.  Taylor Ramsey shot a career best 232 for her 54 holes to finish 66th, while McKenzie Talbert shot 239 to finish 76th.  Lauren Salazar had a 241 and finished 77th.

“I am very proud of the great team effort from the ladies this week,” said Horton.  “What an honor it was to play in front of our home crowd.  It was also special to be able to recognize our seniors, Lauren Salazar and Taylor Ramsey, who helped this program get started.  They will be the first players to graduate from the women’s golf program.”

J.T. Horton’s team will next be in action at the ACC Tournament at fames Sedgefield Country Club in Greensboro, April 15-17.