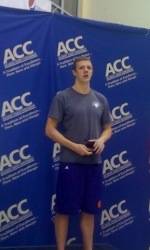 ATLANTA, GA – The Clemson men’s swimming team capped an historic run at the 2011 ACC Championships with several additional school records and an individual conference crown on Saturday at the Georgia Tech Aquatic Center. The Tigers finished the four-day meet in sixth place with 331 points.

“I have never been so proud of a group of Clemson Tigers,” Head Coach Christopher Ip said. “Our staff had great chemistry and the unique ability to solve any problems throw in front of the program. 18 men just broke 11 school records, changed the landscape of the top ten all-time lists, won three ACC championship events, and placed themselves in position to represent Clemson at the NCAA Championship.

“Our team had to battle from a major deficit due to the lack of diving points. Each session they out swam many of the teams in the conference. We came 22 points short of reaching our team goal.”

On Saturday, Chris Dart brought Clemson an ACC Championship with a time of 1:43.77 in the 200 backstroke. It was the second individual title won by a Tiger swimmer for the weekend, with Dart’s trip to the podium and Eric Bruck’s school-record swim in the 50 freestyle on Thursday bringing conference crowns to Clemson. Dart’s swim is also the second-fastest in school history in the 200 backstroke and an NCAA-B qualifying time.

Andrew Abeysinghe also joined the Clemson record books in the 200 backstroke. His tenth-place time of 1:46.60 placed him into fourth place in school history.

Bruck set another school record, this time in the 100 freestyle, with his ninth-place NCAA-B cut swim of 43.23 seconds. That time was almost six-tenths of a second faster than the previous best swim at Clemson.

Chris Reinke also joined the top times list in seventh place with an NCAA-B qualifying swim of 44.51 seconds in his preliminary heat. He finished in 16th place in the event.

Mark Schindler just missed out on a school record with his eighth-place finish in the 200 breaststroke. He fell just three-hundredths of a second short of the all-time record with his NCAA-B cut time of 1:59.91.

Lucas Gerotto swam the 200 butterfly in 1:46.81 to finish in seventh place. It was the second-best time in school history and an NCAA-B cut time. David Gordon also contributed a 16th-place finish.

Yet another school record fell in the relays to close out the ACC meet. The 400 freestyle relay team of Seth Broster, Reinke, Myles Oliver, and Bruck finished in fifth place with an NCAA-B time of 2:54.92. The Clemson men set records in all five relay events during the ACC Championships, quite a remarkable accomplishment.