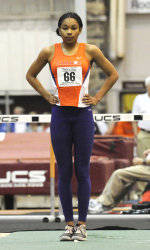 Stephanie Buffo easily won the women’s mile, finishing a half lap ahead of the field. The junior from Spartanburg, SC posted a time of 5:16.04. Tyler Morey followed suit, winning the men’s mile for the Tigers with a time of 4:26.03.

Clemson won both of the 4x400m relays Saturday. The men claimed first with a time of 3:17.89, with a lineup consisting of Maxey, Rispress, La’Mont Jackson and Miller Moss. On the women’s side, the 4x400m relay team of Sonni Austin, Karine Farias, Patricia Mamona and Brittany Pringley turned in a time of 3:47.68 to fend off the school’s `B’ team.

April Sinkler won her second title of the weekend on Saturday, clinching the long jump with an effort of 19’4.75″. Jasmine Brunson, a freshman from Bermuda, was second after a leap of 18’10”. In the men’s long jump, Josh Fowler was fourth after a leap of 22’1″.

Moss was Clemson’s lone competitor in the men’s high jump. The multi-event athlete from Sumter, SC cleared the bar at 6’2.75″ and finished in second place behind Levar Knight from South Carolina State. Xavier Tromp made his much-anticipated debut for the Tigers on Saturday. An exchange student from France with a strong background in the pole vault, won with a mark of 16’4.75″. He then tried three attempts at just over 17 feet, but did not clear the bar.

Alex Padgett also won his second event of the weekend Saturday, taking first in the 35-pound weight throw. He hit a mark of 59’11”. Brittney Waller was runner-up in the women’s 20-pound weight throw, posting a toss of 50’3.5″.

The teams return to action next weekend, January 15-16, in Blacksburg, VA for the Virginia Tech Invitational.