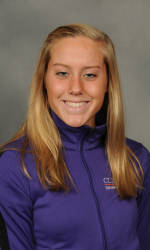 Tigers Fall to Wolfpack in Swimming and Diving

For the men, Thomas Recko won both the 100 and 200 back for the Tigers with Jason Chatlosh finishing second in the 100 back. David Gordon finished second in the 500 free.

In diving, David Giambra took second on both diving events.

The Tigers will return to action on Saturday, January 30 at 11:00 a.m. as they host the Duke Blue Devils in McHugh Natatorium. Clemson will also be honoring their seniors against Duke as it is the final dual meet of the season.