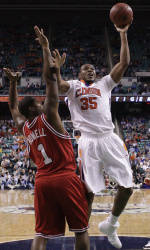 GREENSBORO, N.C. (AP) — Tracy Smith had 19 points and eight rebounds, and North Carolina State downed Clemson in the Atlantic Coast Conference tournament with a 59-57 victory in the first round on Thursday night.

Ending a day of upsets, the 11th-seeded Wolfpack (18-14) built a double-digit lead early in the second half and withstood a late rally to continue their surprising late-season surge. N.C. State, which has won four of five, will face third-seeded Florida State on Friday in the quarterfinals.

Clemson, the only original ACC school not to win the tournament, fell to 16-57 in the event with 43 of those losses coming in its first game.