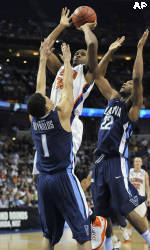 TAMPA, Fla. (AP) –Villanova coach Jay Wright figures someone has to come up with a name for what happened Friday in Tampa.

He even offered one up: “Tampa Turmoil or something,” he said.

Scottie Reynolds scored 21 points, Corey Fisher added 17 and 12th-seeded Villanova gave this NCAA tournament pod its fourth upset in as many games with a 75-69 victory over No. 5 seed Clemson in the first round of the Midwest Region on Friday night.

“It’s incredible what happened here,” Wright said. “I’m sure this is going to be talked about.”

The Wildcats, who have more wins as a lower-seeded team in the tournament than any program since 1979, overcame an 18-point deficit in this one.

It was the perfect ending for a crazy day in Tampa, the bracket-busting town that should be called Upset City after Friday’s opening round.

First, No. 12 seed Western Kentucky knocked off fifth-seeded Drake in overtime with a desperation 26-footer at the buzzer. Then, 13th-seeded San Diego upended No. 4 seed Connecticut, hitting a long jumper with 1.2 seconds left in overtime. And No. 13 seed Siena led from the start to send fourth-seeded Vanderbilt home earlier than expected.

For Villanova’s shocker, Reynolds and Fisher were at the center of it all.

“We didn’t want to let this time slip away,” Reynolds said.

The Wildcats trailed 36-18 with 5 minutes to play in the first half. But they started hitting from 3-point range – Reynolds made his first three 3s after the break – and slowly sliced into the big lead.

Reynolds’ biggest shot was an off-balance 3-pointer with Cliff Hammonds in his face just before the shot clock expired. Hammonds fouled him on the play, then dropped his head in disbelief after the ball banked off the backboard and through the hoop.

Reynolds missed the free throw, but his bucket gave Villanova its first lead of the game, 50-49 with 11:56 remaining.

Clemson nearly folded from there, looking every bit like a team that hadn’t been in the NCAA tournament in 10 years.

But Villanova helped the Tigers get back in it.

The Tigers trailed 64-57 with 3:44 remaining, but Terrence Oglesby made five consecutive free throws – three after he was fouled on a 3-pointer and two more after Wright was whistled for a technical.

“I deserved it,” Wright said. “It’s like you tell the players all the time, ‘You’ve got to forget about it,’ But in the back of my mind, I’m hoping it doesn’t cost us.”

Clemson’s Demontez Stitt tied it at 66 with two more free throws with 1:55 to go, but the Wildcats retook the lead by making 9-of-10 from the stripe over the final 1:37.

Clemson said tournament experience was overrated, and players pointed to their run in last year’s NIT as something that would help them.