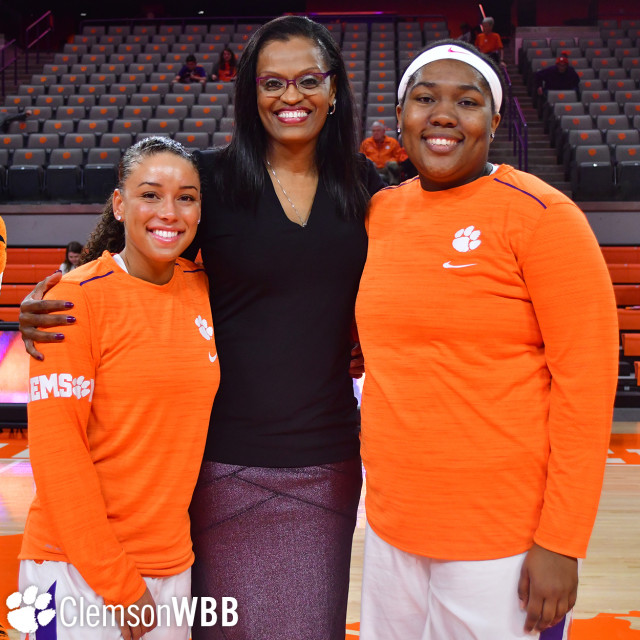 CLEMSON, S.C. – Despite 17 points apiece from Danielle Edwards and Kobi Thornton, the Clemson women’s basketball team fell to Wake Forest, 61-55, on Thursday night at Littlejohn Coliseum. With the loss, the Tigers end the regular season at 11-18 (1-15 ACC), while the Demon Deacons improve to 13-15 (5-10 ACC) with one game left to play.

Edwards hit a three-pointer three minutes into the first quarter, which gave the Tigers momentum, and set the tone to start off the game. Edwards finished the first quarter with seven points, and the defense forced five Demon Deacon turnovers, leading to a 13-11 lead at the end of the period. Clemson had an 11-0 lead in points off turnovers in the first quarter.

The Tigers were even better in the second quarter, on offense, making 58% (7-for-12) of their field goals, and on defense, forcing seven more Wake Forest turnovers. Clemson made 5-for-6 field goals to end the half, while the Demon Deacons were 0-for-6, resulting in a 32-28 Tiger lead at the break. Edwards had 13 points in the first half, while Thornton registered eight points, seven rebounds and three blocked shots. Senior Alexis Carter recorded six points, four assists and a steal in the first half, a good start to Senior Day for the native of Portland, Ore.

Wake Forest’s leading scorer and three-point threat Elisa Penna came alive in the third quarter, hitting two threes in the first two minutes of the period. In all, she was 3-for-4 from long range in the quarter, after making just 1-for-5 in the first half, which led to a 16-7 Demon Deacon advantage in the third quarter, as well as a five-point lead. The Tigers fought back in the fourth quarter, cutting the deficit to three points with 3:15 remaining, but could not get any closer.

Thornton finished the game with her second-straight double-double, and her fifth of the season, with 17 points and 11 rebounds, and also added four blocked shots. Edwards had a great all-around effort as well, with 17 points, four rebounds, five steals and two assists.

Carter was also in double figures in scoring, posting 12 points in her final game in Littlejohn, while also tying her career high by dishing out six assists. Senior Ivy Atkism tied her season-best with six rebounds against the Demon Deacons.

The Tigers return to action next week for the 2018 ACC Tournament, held Feb. 28-March 4 at the Greensboro Coliseum in Greensboro, N.C. Tournament seeds, matchups and game times will be announced in the evening on Sunday, Feb. 25.