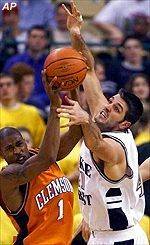 WINSTON-SALEM, N.C. (AP) – Reserves Craig Dawson and Josh Shoemaker provided sparks down the stretch as Wake Forest broke a month-long offensive slump with a 79-63 victory over Clemson on Tuesday night.

The Demon Deacons (13-10, 4-6 Atlantic Coast Conference) hit the 70-point mark for the first time since getting 84 against Ohio on Dec. 29 and improved to 9-0 this season when reaching that plateau.

Darius Songaila led Wake Forest, which had lost three straight and six of seven, with 16 points, but Dawson added 13 and Shoemaker 10 in limited action off the bench.

The Tigers (8-15, 2-8) lost for the 10th straight time in Joel Coliseum. ACC-scoring leader Will Solomon led Clemson with 29 points.

After trailing by as many as 17 early in the second half, the Tigers went on a 10-2 run to close to 49-41 with 10:29 left. But Robert O’Kelley made three free throws after being fouled by Solomon beyond the arc and Dawson scored on a baseline jumper to give the Demon Deacons some breathing room.

The Tigers never got closer than 11 the rest of the way. Shoemaker make sure of that, scoring on a 15-footer, a pair of foul shots and a breakaway dunk over a 34-second span for a 67-50 lead with 4:06 left.

The Wake Forest bench outscored the Tigers 34-11, and the Demon Deacons were 33-for-40 from the foul line.

Clemson was coming off a six-turnover effort against North Carolina on Sunday – its lowest in almost two years – but coughed it up 10 times in the first 12 minutes in a sloppy start.

In addition, Clemson managed just two field goals during that span as Wake Forest built a 12-point lead at 24-12.

A Solomon 3-pointer narrowed the Clemson deficit to seven, but the Demon Deacons closed the half with an 8-2 spurt to lead 34-21.

Songaila scored nine points or less in three of his last four games, but had 11 by halftime in 16 minutes as the Demon Deacons shot 54.5 percent.