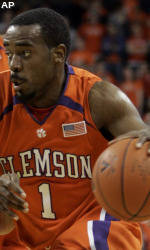 CHARLOTTESVILLE, Va. (AP) -On the day Virginia honored its biggest star of the past decade, Sylven Landesberg showed he’s ready to assume the position as the next one.

The freshman guard tied the game on a driving basket with 13.4 seconds left in regulation and added six of his 23 points in overtime Sunday as Virginia beat No. 12 Clemson 85-81, ending an eight-game losing streak on the day Sean Singletary’s No. 44 jersey was hung from the rafters.

Fittingly, Landesberg played all 45 minutes, becoming the first Virginia player to play an entire game since Singletary did in a 65-60 victory over Virginia Tech in 2005.

“This win, it’s going to help us a lot,” said Landesberg, who had four rebounds, three assists and three steals. “We needed just one win to push us ahead, and this was it.”

And they got it mostly because of the New York City high school star.

“He’s proven this early in his career that he’s not only a really good player but he’s a big money player,” said Virginia coach Dave Leitao, who got on the public address microphone on his way off the court to thank the crowd for contributing to the victory with its energy and support.

It was the first victory for Virginia (8-13, 2-8 Atlantic Coast Conference) since it beat Brown on Jan. 6, and ended its longest losing streak since it lost eight in a row in 1997-98.

“We desperately needed that,” said Sammy Zeglinski, who hit all six of his field goal attempts, including three 3-pointers, and finished with 15 points and six assists.

“It was real emotional and from here on out, we know we can win these games,” he said.

Key for the Cavaliers, Zeglinski said, was the early going in the second half, when Clemson erased a 33-25 deficit by scoring the first 14 points of the second half.

“They punched us and we just came back swinging,” Zeglinski said.

Terrence Oglesby had 17 points, including five 3-pointers, for the Tigers (20-4, 6-4), but his leaning attempt with about 8 seconds left was well off the mark. When Jamil Tucker grabbed the rebound and was fouled under the basket, his free throw all but clinched the victory.

The Tigers got 16 points from Trevor Booker and 15 from K.C. Rivers, but they could not sustain the efficiency they brought out of the locker room at halftime.

“If you’re not dead-on sharp, you’ve got a chance, on someone else’s home court, you’ve got a chance for something like this to happen,” Tigers coach Oliver Purnell said. “Any time you go to overtime, it’s anybody’s ballgame, particularly if you’re on the road.”

After Oglesby’s fifth 3-pointer gave the Tigers the lead in overtime, Tucker scored inside, Zeglinski followed a steal by Scott with a layup and Landesberg followed a Clemson miss with another driving basket, giving the Cavaliers an 80-77 lead with 2:53 to play.

When Booker made it a one-point game with two free throws, Landesberg scored on Virginia’s next two possessions, and the Tigers got no closer than three points thereafter.

In regulation, Landesberg scored on a drive with 13.4 seconds left to draw the Cavaliers even at 74, and Clemson missed three times – twice from in close – in the closing seconds.

After trailing almost throughout the first half, Clemson opened the second half on a 14-0 run to take a 39-33 lead. Oglesby hit two 3-pointers and Rivers had another as the Tigers’ long-range game arrived after they missed 10 of 11 3-point shots before halftime.

But instead of fading, as it has repeatedly this season, Virginia responded. Scott scored six points in a 13-3 run that put the Cavaliers ahead 46-42. They led by as many as five, but the Tigers rallied to tie it numerous times, then went ahead 73-72 on Rivers’ 10-footer with 1:20 left. His free throw with 29.4 seconds left doubled the lead before Landesberg tied it.