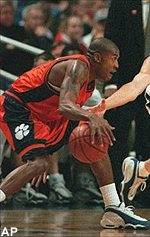 CLEMSON, S.C. (AP) – Ed Cota scored 17 points and bailed North Carolina out in almost every critical situation Sunday in a 73-60 victory at Clemson.

That’s when Cota, the senior point guard, took control with a driving layup and, after Andrius Jurkunas’ dunk, two foul shots for 60-56 lead.

He also clamped down on defense, bottling up Solomon and the Tigers, who missed their next 10 shots after getting back in it. Cota had a steal that led to two Brendan Haywood free throws, then hit one himself as the lead grew to 65-58 with two minutes left.

Even in the first half, Cota was timely. Solomon had made his third straight 3-pointer to slice a large lead to 32-30 when Cota struck for his own long-range basket moments before the buzzer.

Solomon, who led everyone with 26 points that included six 3-pointers, went 0 for 3 down the stretch.

Cota also had six rebounds, seven assists and a steal for the Tar Heels, who recovered from a 90-86 overtime loss to rival Duke this past Thursday night.

Capel finished with four 3-pointers and 14 points. Kris Lang scored 12 points and Joe Forte and Brendan Haywood had 11 points each.

North Carolina had lost five of its past seven coming in, but proved more than capable of defeating one of its favorite foes. The Tar Heels have swept the regular-season series from Clemson in eight of the past 10 years. They hold a 20-3 mark over the Tigers in that span.

The Tar Heels led 7-0 and were up 19-13 when coach Bill Guthridge replaced his starters with five reserves – two juniors, a sophomore and two freshmen. The group did not score, but did not allow any points during the nearly two minutes of play. When the starters returned, Capel hit his third 3-pointer of the half and Forte made two foul shots for a 24-15 lead.

Capel and Cota had 9 points each as North Carolina led 35-30 at the break.