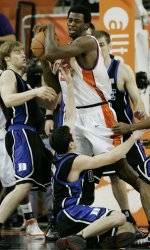 The Blue Devils (16-0, 4-0 Atlantic Coast Conference) are off to their best start since the 1992 NCAA champions opened 17-0. And after losses Saturday by Georgia Tech and North Carolina, Duke is the ACC’s only unbeaten team.

Duke hasn’t lost to the Tigers (13-4, 2-2) since Rick Barnes was coaching them in 1997. But it took just about everything Redick had to keep the streak going.

But Redick dribbled up the court and found a wide-open Sean Dockery for a layup and Clemson could not get any closer.

Redick, like many Duke players during the streak, has never lost to Clemson. He single-handedly kept the Blue Devils in this one in the first half with 17 points.

Redick’s first 3-pointer put Duke ahead 16-12. Two minutes later, he made two free throws for a 20-18. And, after Clemson rallied to go up 31-30, Redick hit another long-range shot and a layup to put Duke ahead once again.

Redick, though, was there to answer. He scored six of Duke’s next eight points to restore the comfortable lead.

Williams started the run with a slam, then Redick hit two free throws. He drove the right baseline for a basket on Duke’s next possession and finished the spurt with a layup.

Williams followed up a triple-double in his last game against Maryland (19 points, 11 rebounds and 10 blocks) with his eighth game in double figure points and rebounds.

Vernon Hamilton led Clemson with a career-high 31 points. His total surpassed his previous best of 21, set this past Wednesday in a 74-73 overtime win against Wake Forest.

The Tigers had ended a five-game losing streak to the Demon Deacons in that one and hoped to put aside their much-longer string of futility against the Blue Devils.

Instead, Redick and his teammates made sure Duke’s mastery lasted a bit longer.

Redick was just 3-of-6 from the line – including missing two on one trip – in the first half. He finished 12-of-16 from the line, the first time he had more than two misses in a game this season.