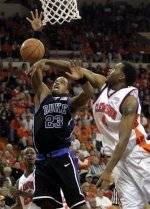 Duke Head Coach Mike Krzyzewski Quotes:“I promise you that this is a dangerous venue to play in. We are very happy to get a win, especially in the conference on the road.”

“That was the hardest any team has played against us all year. We’ve had some teams play hard against us this year, but not like Clemson did today.”

“We were not surprised by their effort, and we expected them to play that way. We have had a long week. We started on Sunday night against Wake Forest, played Maryland midweek, and ended here on Saturday afternoon against Clemson.”

“Clemson played us for 40 minutes and I thought our composure was outstanding today. I thought Greg Paulus did a great job today on the road and played a great game for us. J.J. Redick and Sheldon Williams performed like veterans today, as well.”

Clemson Head Coach Oliver Purnell Quotes:“You don’t get opportunities like that very often. I’m not happy about the loss.”

“Overall we aren’t good shooters. That’s why we struggle at the free throw line. So we have to play outstanding defense.”

“It is difficult to play against Duke because they isolate Redick and Williams to take advantage of that. But if you double team them, the other guys on the floor aren’t chopped liver. They all know their role.”

“We had six turnovers that turned into lay-ups. That was one thing that we wanted to avoid.”

“Vern was outstanding tonight. He and Cliff were making the mid-range shot. They could penetrate past the perimeter, and stopped short of Williams.”

“I felt like we let that one slip away. However, we have lots of other chances to redeem ourselves. It is a tough conference.”