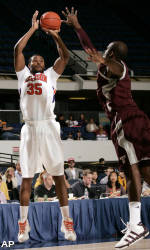 David Loubeau added 12 points and nine rebounds and Bryan Davis had 10 points for the Aggies (4-0), who will face No. 8 West Virginia in a semifinal game on Friday.

Texas A&M led by as many as 17 early in the second half before Clemson pulled to 58-56 when Tanner Smith made two free throws with 5:14 remaining. Smith finished with 14 points.

A free throw and then Holmes’ 3-pointer gave the Aggies some breathing room and Clemson could never recover.

With the game tied at 18, Khris Middleton and Holmes made 3-pointers during the Aggies 15-2 run that included three layups from Donald Sloan to take a 33-20 halftime lead. Clemson’s 20 points in the first half were the fewest the Tigers have scored since getting only 17 against Florida State on Feb. 19, 2008.

Texas A&M extended its advantage to 44-29 before Clemson used a 13-4 run to get back into the game. The Tigers were done in by poor shooting (33.9 percent) and 18 turnovers.