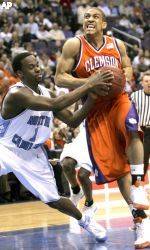 Raymond Felton made sure it didn’t happen.

The star point guard made the go-ahead 3-pointer with the shot clock winding down in the final 90 seconds, and the second-ranked Tar Heels avoided the biggest upset in Atlantic Coast Conference tournament history with an 88-81 victory over the Tigers on Friday in the quarterfinals.

Since the conference expanded to nine teams in 1992 – it since has gone to 11, and Boston College joins next season – no ninth-seeded team has beaten the No. 1 seed. The Tar Heels (27-3) clearly were on the ropes, trailing by 13 points with about 9 minutes left before rallying behind Felton, their All-ACC point guard.

“His will and his play was incredible,” teammate Sean May said.

Felton had 24 of his career-high 29 points in the second half and scored the final 10 points for North Carolina. Time and again down the stretch, he drove to the basket and either scored or drew a foul, and his 3 with 5{ minutes remaining cut the margin to two.

“He didn’t exactly take over,” North Carolina coach Roy Williams said. “But one important part of our offense is Raymond’s penetration, and I think he really did force the issue three or four times in a row.”

The Tigers (16-15) increased their lead back to five on a three-point play by Olu Babalola, and they still led 79-77 on Vernon Hamilton’s over-the-shoulder layup with 2:20 left. Rashad McCants, playing for the first time since missing four games with an intestinal disorder, made a free throw and Clemson missed a pair of shots on its next possession.

That set up Felton’s fourth and final 3-pointer. With the shot clock under 10, he shot over Hamilton from a few steps beyond the arc, and it swished through for the Tar Heels’ first lead since late in the first half.

“The shot clock was going down, and I was looking for a ball screen,” Felton said. “Hamilton was trying to cheat over it, and he left me wide open.”

At that point, Roy Williams chimed in: “And the coach said shoot it.”

Shawan Robinson tried to answer on the other end, but his effort fell well short of the rim, and Felton and North Carolina held on.

Robinson had 15 of his 17 points in the first half, a day after he scored 24 points in an upset of Maryland. Hamilton added 16 and Sharrod Ford finished with 15 for the Tigers.

“Basically, we just played hard for 37 minutes, and the last 3 minutes, they went on that run and we couldn’t hold them off,” Ford said.

McCants, May and Jawad Williams all had 13 for the Tar Heels, who advanced to the semifinals against the winner of the Georgia Tech-Virginia Tech game later Friday.

North Carolina seemingly locked up a No. 1 seed in the NCAA tournament with a dramatic victory over Duke earlier in the week, which wrapped up its first outright regular-season title since 1993. But Clemson, playing inspired basketball in the last couple of weeks to win four of its previous five games, gave the Tar Heels all they could handle.

“You never have doubt,” North Carolina forward Marvin Williams said. “You’ve just got to keep fighting. You’ve got to be ready, because really good teams are not going to let you come back from 13 down.”

The Tigers led throughout most of the second half, holding North Carolina to only one basket during one 8-minute span. When Ford made a free throw with 9:20 remaining, they led 71-58. Williams snapped the Tar Heels’ drought with a three-point play, and McCants swished two 3s in a matter of seconds to start the comeback, and Felton finished it off.

The Tar Heels were helped by a school-record effort at the free-throw line for the ACC tournament. They finished 37-of-47, two more than they made in 1956, while the Tigers were 20-of-29.