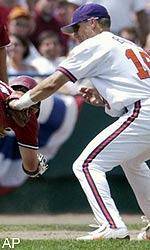 The Gamecocks (57-17) beat their state rivals for the second time in three days and won their fourth straight elimination game. South Carolina will play Texas (56-15) for the national title Saturday in a rematch of the 1975 championship, which Texas won 5-1.

South Carolina had 13 hits and took advantage of three errors and three wild pitches while completing a 4-0 run through the CWS that was made necessary after an 11-0 loss to Georgia Tech in the opener. Southern California in 1998 was the last team to lose its opener and make it to Saturday. The Trojans won it all that year by beating Arizona State 21-14.

Kevin Melillo was 3-for-5 with three RBIs, including a two-run single as South Carolina pulled away with a five-run eighth. Garris Gonce, who drove in two in the eighth with a single, went 3-for-6 and scored three runs to lead the Gamecocks to their first title game since the loss to Texas in ’75.

Bondurant (7-4), a junior left-hander, had not pitched a complete game since a 4-3 win over Alabama on March 31, when he yielded nine hits. He held the Tigers to five hits through eight innings before giving up a run in the ninth. He struck out seven.

Clemson (54-17) opened the CWS 3-0 and needed to beat the Gamecocks just once to advance to Saturday, but couldn’t do it after going 3-1 against South Carolina during the regular season.

Matt Henrie (13-5), who had a win and save in two relief outings, allowed five runs, three earned, over 2 2-3 innings in his first start of the CWS.

Jeff Baker and Zane Green had RBI singles for Clemson, which trailed 10-1 entering the ninth. The game ended when Greene flied out to right with the bases loaded.

The Gamecocks rallied for wins over Nebraska, Tech and the Tigers to reach Friday’s elimination game, which was the first time in the CWS they took the lead.

There was no indication of any ill will lingering from South Carolina’s 12-4 win on Wednesday, when the Gamecocks taunted the Tigers a bit after some big plays. This time the only flustering South Carolina did was on the field.

The Gamecocks took a 3-0 lead on RBI singles by Landon Powell and Melillo and added two more in the third on an error, a hit and two wild pitches. Trey Dyson reached first on Greene’s throwing error, went to third on a single by Gonce and scored on Henrie’s wild pitch.

Gonce went to second on another wild pitch and scored when Brian Buscher singled to left, making it 5-0.

Powell, who was 2-for-4 with three RBIs, walked with the bases loaded in the eighth.