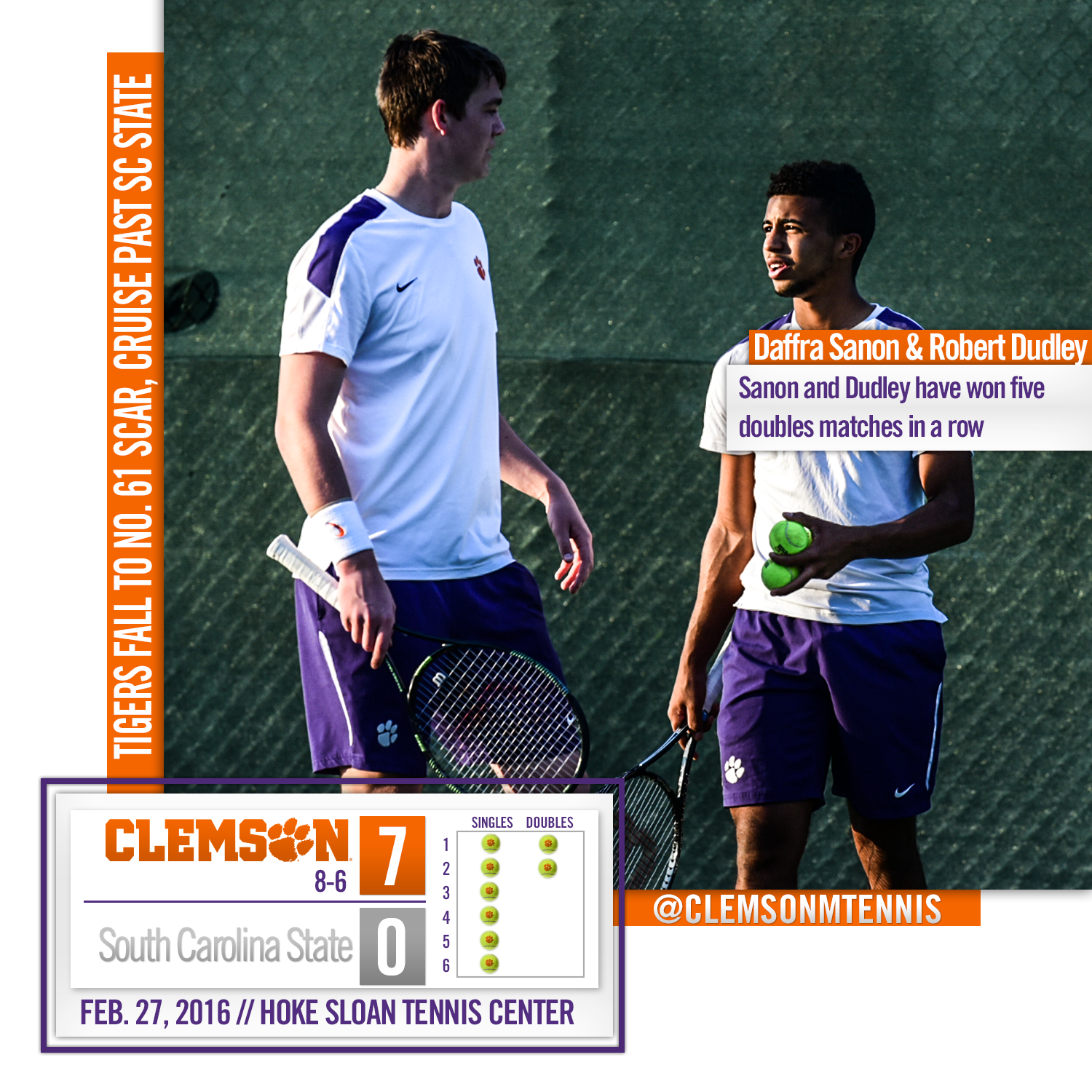 CLEMSON, S.C. – The Clemson men’s tennis team fell to the Gamecocks 4-0 on Saturday morning at the Hoke Sloan Tennis Center. The Tigers bounced back in their second match of the day, defeating South Carolina State, 7-0, to improve to 8-6 on the season.

Recap vs. South CarolinaSouth Carolina clinched the doubles point over the Tigers. The Gamecocks won on court two first, 6-1, followed by a win by Daffra Sanon and Robert Dudley on court three, 6-2. Sanon and Dudley have now won four straight matches as doubles partners. The point ultimately came down to court one, where Luke Johnson and Alex Favrot fell for the first time this season, losing 7-5 in a hard fought match.

In singles play, South Carolina gained three points from courts two, four and six. The Gamecocks started off with a win on court four where Arturo Pinazo fell in two sets, 6-0, 6-4. Sanon and Brent Lett also fell in straight sets, resulting in the 4-0 win for the Gamecocks. Johnson had battled back from a first set loss (3-6) at No. 3 singles to win his second set 7-5, and was tied in the third set when the match was halted.

“Credit to Coach Goffi and Coach Young on bringing a very energetic team to Clemson today. It was very evident if you watched the match, which team wanted it more,” said Head Coach Chuck McCuen. “South Carolina put themselves in a very uncomfortable situation being on the road at Clemson, and rose to the challenge in an exceptional way. A lot of credit goes to their coaches and players, they found ways to dig out tough balls and to never go away during a point.

“The one thing I was most discouraged by today from our team was their lack of passion and engagement,” added McCuen. “We got out-cheered and outplayed by the Gamecocks. It felt like we were at South Carolina and not at Clemson today. We have an incredible staff that worked very hard to get a great crowd here today and our team did not give them what they deserved. Today was the best crowd of the year; a performance like this will not happen again and you will see a changed team.”

Clemson cruised through singles to clinch the point over the Bulldogs. Johnson got the first point for the Tigers when his opponent retired from the match. Johnson was winning the first set 5-0 on court two when play stopped. Favrot won in commanding fashion over his opponent at No. 1 singles, winning in straight sets, 6-1, 6-1. Christian Harris was not far behind, coasting for a two-set win (6-2, 6-1) on court six for the match clinching point. Singles play continued, allowing Sanon and Austin Ansari to defeat their Bulldog counterparts. Brent Lett finished the sweep with a tiebreak win in the third set, 12-10.

“I want to commend our team,” noted McCuen after the second match of the day. “They came out after a tough loss to South Carolina and rebounded together, showing me the competitive spirit that I know this team has. We showed who we are in the second match. Now it is time to get some rest and be ready next week to start the second third of our season as we begin ACC play on Friday against Florida State.”

Clemson returns to the courts on Friday, March 4, when the Tigers open ACC play against the Seminoles at 11 a.m. at the Hoke Sloan Tennis Center. The Tigers will then host USC Upstate at 5 p.m. on Friday night.