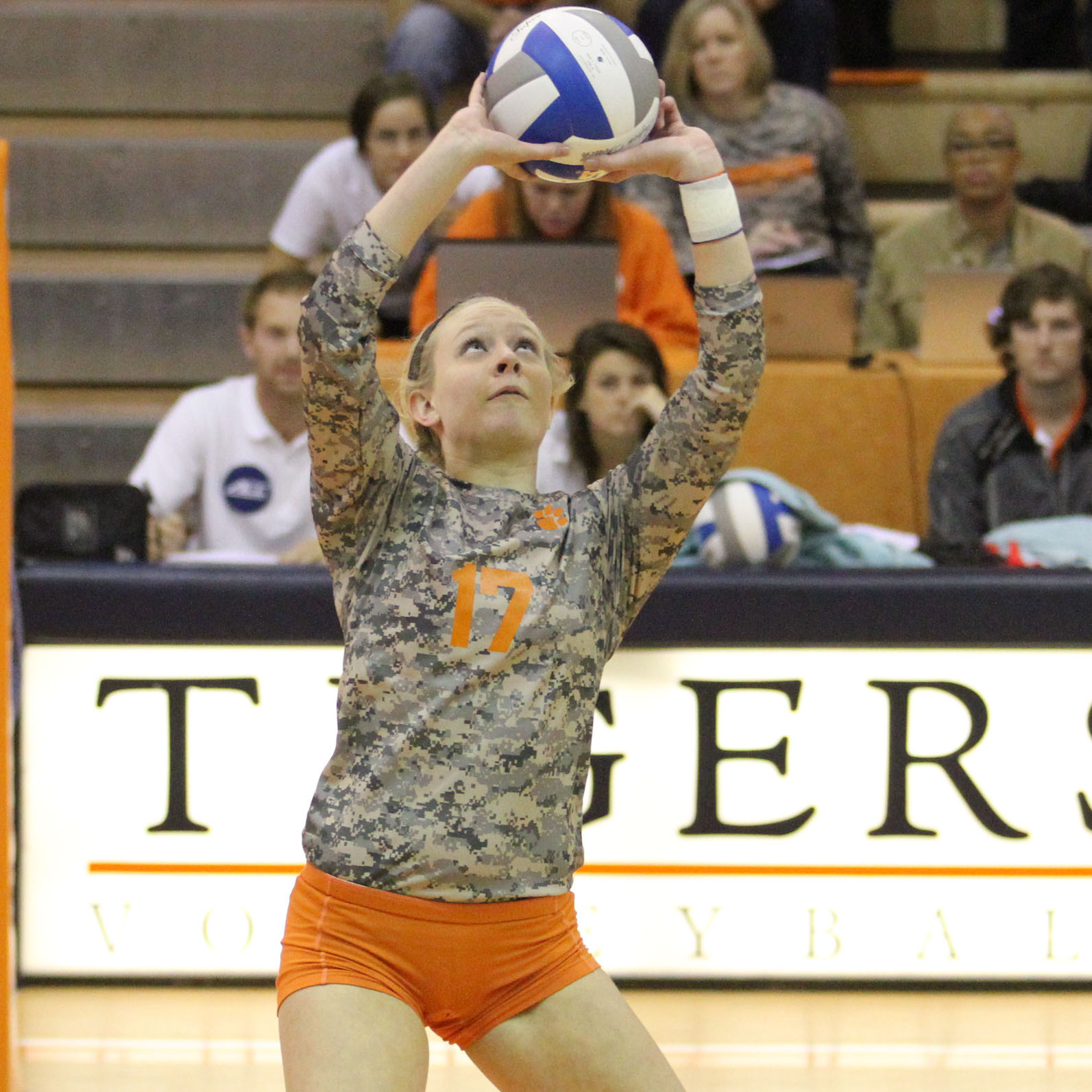 CLEMSON, S.C.  – The Clemson volleyball team battled, but ultimately fell to Pittsburgh in four sets (26-24, 17-25, 20-25, 21-25) on Sunday in Jervey Gym. With the loss, the Tigers dropped to 14-6 overall and 3-4 in the ACC, while the Panthers, who entered the match in fourth place in the ACC standings, improved to 17-2 and 5-1 in league play. Clemson stood in eighth place in the conference standings entering today’s match.

Senior Kristin Faust led the Tigers with 13 kills and sophomore Leah Perri added 10. Freshman Kate Federico ran the offense with 31 assists and led the backcourt defense with 19 digs. The setter also posted seven kills in the match, and was just three kills away from recording her first career triple-double. The Tigers had 19.0 total blocks as a team, with 8.0 coming in the fourth set. Senior middles Beta Dumancic and Karis Watson posted 10 and 8 blocks, respectively. Dumancic’s 10 blocks tied her career high for blocks in a single match.

The first set was a battle, with Clemson and Pittsburgh going back-and-forth until the Tigers won in extra points, 26-24. The teams were relatively even offensively, but the Tigers were able to play slightly better defense. Clemson put down four blocks to Pittsburgh’s two. Faust posted seven kills in the set, and Federico recorded eight of her 19 digs.

The Panthers answered in set two with improved defense at the net. They kept the Tigers at a .000 hitting percentage and put down six blocks as a team. Pittsburgh hit just under .300, led by Maria Genitsaridi with six kills.

The Tiger offense came back in set three, hitting .294 led by four kills by Faust and three apiece by Perri and graduate Haleigh Hampton. The Panthers’ offense also improved in the set, hitting .368 as a team behind five kills from Kate Yeazel.

Clemson’s offense struggled again in the fourth set, hitting below .100. However, the Tigers’ front row defense racked up eight blocks in the fourth set alone, holding the Panthers to a .132 hitting percentage to keep the score close. Ultimately a few hitting errors by the Tigers gave Pittsburgh the advantage in the match and it took the final set 25-21.

The Tigers are on the road for two matches next weekend. First, Clemson travels to Durham to take on the Duke Blue Devils on Friday, Oct. 24, at 6:30 p.m. On Sunday, Oct. 26 the Tigers face Virginia Tech at 1 p.m. in Blacksburg.