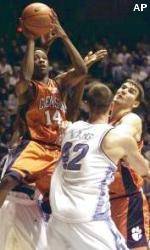 CHAPEL HILL, N.C. – At least North Carolina was able to save one streak during the worst season in school history.

The Tar Heels won’t win 20 games for a 32nd straight year or head to the NCAA tournament for the 28th consecutive time, but kept Clemson winless in Chapel Hill with a 96-78 win Wednesday night.

The Tigers (13-16, 4-12 Atlantic Coast Conference) fell to 0-48 all-time here and will finish at least tied for last place in the ACC for a third straight year under coach Larry Shyatt.

The last time Clemson finished in the cellar three straight years was 1970-72.

Jason Capel, a four-year starter playing his last home game, was one of many stars on this night for a team that hasn’t been able to get its act together for a full 40 minutes many times.

Capel’s previous best was 27 twice, the most recent this season against Maryland.

Clemson’s Tony Stockman put on a shooting clinic from 3-point range in the opening 20 minutes, going 8-of-10 for 28 points. But the junior guard didn’t score his first basket until midway through the second half with his team already down by more than 20.

That was his only basket of the second half as he matched his career high of 30 points and his eight 3-pointers tied a school record held by four others.

Capel hit a baseline jumper, had a follow and two free throws during the pivotal run, while Williams made three straight hoops as the Tar Heels were on their way to beating Clemson by double digits for 18 of the last 19 games in the Smith Center.

A majority of the offense in the first half was played beyond the 3-point line as the two teams combined to go 16-for-32 from long range.

The Tigers missed seven of their first eight shots before Stockman began his amazing run of 3-pointers, making five straight at one point to come within two points of his career high of 30 in 17 first-half minutes.

North Carolina’s first-half lead reached 19 midway through the period on 7-of-14 shooting beyond the arc before Clemson had a closing 25-12 run to pull within eight at the break.

Stockman began the run with a pair of 3-pointers and ended it with two more for 19 points in a span of 9:06.