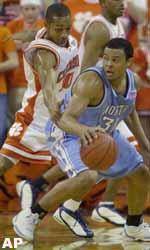 CLEMSON, S.C. – It was a different locker room scene for North Carolina – a happy one.

“We haven’t felt like this in you all know how long,” forward Jason Capel said after the Tar Heels broke their longest losing streak in 41 seasons with an 87-69 victory over Clemson on Sunday night.

“It’s relief, it’s joy, it’s pride,” said Tar Heels coach Matt Doherty, the lightning rod for his team’s poor season. “I think there’s a lot of emotions that go into it. I can’t tell you how proud I am of these guys. A lot of kids would’ve folded their tent and packed it in. They didn’t.”

Boone, a sophomore, surpassed his previous high of 13 points, set last month against North Carolina A&T, in the first half alone with 15 points. He and backcourtmate Melvin Scott kept the pressure on in the second half and North Carolina ended its longest slide since losing eight consecutive games in 1950-51.

Clemson (11-10, 2-6) thought it had a chance to end its four-game losing streak, but this one ended like so many others for the Tigers – getting run down by the Tar Heels.

North Carolina is 110-17 all-time against Clemson.

Boone got things going with three consecutive 3-pointers as North Carolina broke to a 17-8 lead.

“We know we’ve been improving every game, every practice, every day,” Boone said. “Hopefully, this is something that can give us confidence, beating a good team on their home court.”

The Tar Heels led 45-37 at halftime, their most points at the break since leading Texas A&M 45-33 on Dec. 30, which was also their last win before the losses started.

They tied their season-high with 11 3-pointers, only the second time they reached double figures from beyond the arc in the past eight games. They had their best shooting game of the season, going 31-of-56 (.554) from the field.

Clemson struggled from the field, hitting only five of 22 3-pointers.

Scott’s 3-pointer with five minutes left gave the Tar Heels a 72-51 lead as his teammates leaped off the bench in delight.

Such baskets are usually routine at North Carolina. But nothing has been the same for this team since their last visit to Littlejohn Coliseum. The Tar Heels came in last season with the No. 1 ranking and an 18-game winning streak. They left with a 75-65 loss to Clemson and had gone only 10-16 before Sunday’s victory.

Scott finished with 17 points and Kris Lang had 12.

Capel, the Tar Heels leading scorer and rebounder this season, returned after missing three games with a concussion sustained in practice. He finished with seven points, five rebounds and four assists.

Jamar McKnight led the Tigers with 21 points, their only double-digit scorer.