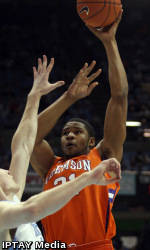 CHAPEL HILL, NC – Clemson shot just 37 percent from the floor and committed 15 turnovers as North Carolina pulled away in the second half for a 74-52 victory over the Tigers a the Dean Smith Center on Saturday. With the win, No. 8/7 North Carolina improved to 23-4 on the season, 10-2 in the ACC. The Tigers fell to 13-13 overall, 5-7 in conference play.

UNC ended the game on a 27-11 run after Clemson cut the lead to six in the second half. The Tigers did not make a field goal in the final seven plus minutes Saturday.

The Tigers were led offensively by Andre Young, who scored a team-best 13 points. He made 3-of-7 from behind the arc. Devin Booker and Milton Jennings both added nine points apiece, with Booker leading Clemson with nine rebounds. For the Tar Heels, Harrison Barnes scored a game-high 24 while Kendall Marshall handed out 13 assists.

Clemson led early 7-2 behind five quick points from Young, but the Tar Heels responded with a 9-0 run punctuated by a dunk from John Henson. The UNC lead grew to 12 at 23-11 as Barnes hit a pair of three-point shots in a span of a minute and a half.

The Tiger defense held Carolina at arm’s length in the final minutes of the opening half. UNC scored just six points in the final five minutes, as Clemson scored eight points during the stretch, including five from Booker. Young took the ball with 4.1 seconds left after a Tiger stop and launched a 25-footer that was true, making it 31-22 at half in favor of the Tar Heels.

Clemson pulled to within six early in the second frame as Young buried a three off an offensive rebound. Carolina extended the lead to double digits at 45-33, but the Tigers again were within six after an 8-2 run that featured a three from freshman T.J. Sapp and five straight points by Smith, the last two by a steal and layup on the other end. But, Clemson turned the ball over on three straight trips and then missed a pair of shots to come up empty on five straight possessions.

The deficit back at 10, Clemson scored a couple of baskets to trim the lead to eight, including a driving baseline dunk by K.J. McDaniels, but the Tar Heels continued to surge offensively and pushed it to 58-47. The lead was never lower than 10 the final eight minutes of the game.

The Tigers return to action Tuesday to face Georgia Tech at Philips Arena in Atlanta. The game is scheduled for a 7:00 PM tipoff.