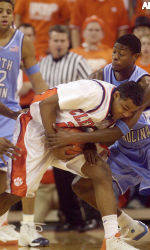 Tigers Fall To No. 6 Tar Heels

CLEMSON, S.C. (AP) – Rashad McCants scored 17 of his 23 points in the second half and North Carolina overcame a sluggish start to defeat Clemson 77-58 Wednesday night.

Early on, McCants and the rest of the sixth-ranked Tar Heels (15-2, 4-1 Atlantic Coast Conference) looked as if they were still thinking about Saturday’s loss at Wake Forest. They committed 16 turnovers in the first half and went through a pair of scoring droughts that totaled almost 11 minutes.

Not everything went McCants’ way. Moments after his 3s, he drove for a high-flying jam and was called for a technical as he lifted himself up on the rim before letting go.

He jogged back to the other end, hands up as if to say “I didn’t do it” and shaking his head as the large crowd screamed at him.

McCants ended his night with one more two-handed dunk with about two minutes left.

While the Tar Heels hold a 50-0 edge all-time over Clemson (10-7, 1-4) in Chapel Hill, N.C., this was just their second victory in the last five meetings at Littlejohn Coliseum.

Point guard Raymond Felton added 11 points and 10 rebounds for the Tar Heels, who had won 14 straight before falling to the Demon Deacons.

Freshman Cheyenne Moore made four 3-pointers and led Clemson with a career-high 14 points.

It was the Tigers’ second big home loss in the last two weeks. Wake Forest won at Littlejohn 103-68 on Jan. 8.

North Carolina jumped out to a 19-8 lead before sloppy play and bad shooting got the Tigers back in it.

The Tar Heels went 5:45 between points, then followed that up with a cold streak of 5:13. They also had 16 of their 21 turnovers in the opening period.

North Carolina’s Jawad Williams put back McCants’ missed 3-pointer with 12.9 seconds to go, tying the score at 27 at halftime.

North Carolina’s first-half turnovers nearly matched its game average of 17.8. Nobody was immune. The usually steady Felton committed four turnovers in the opening period as did North Carolina forward Sean May.