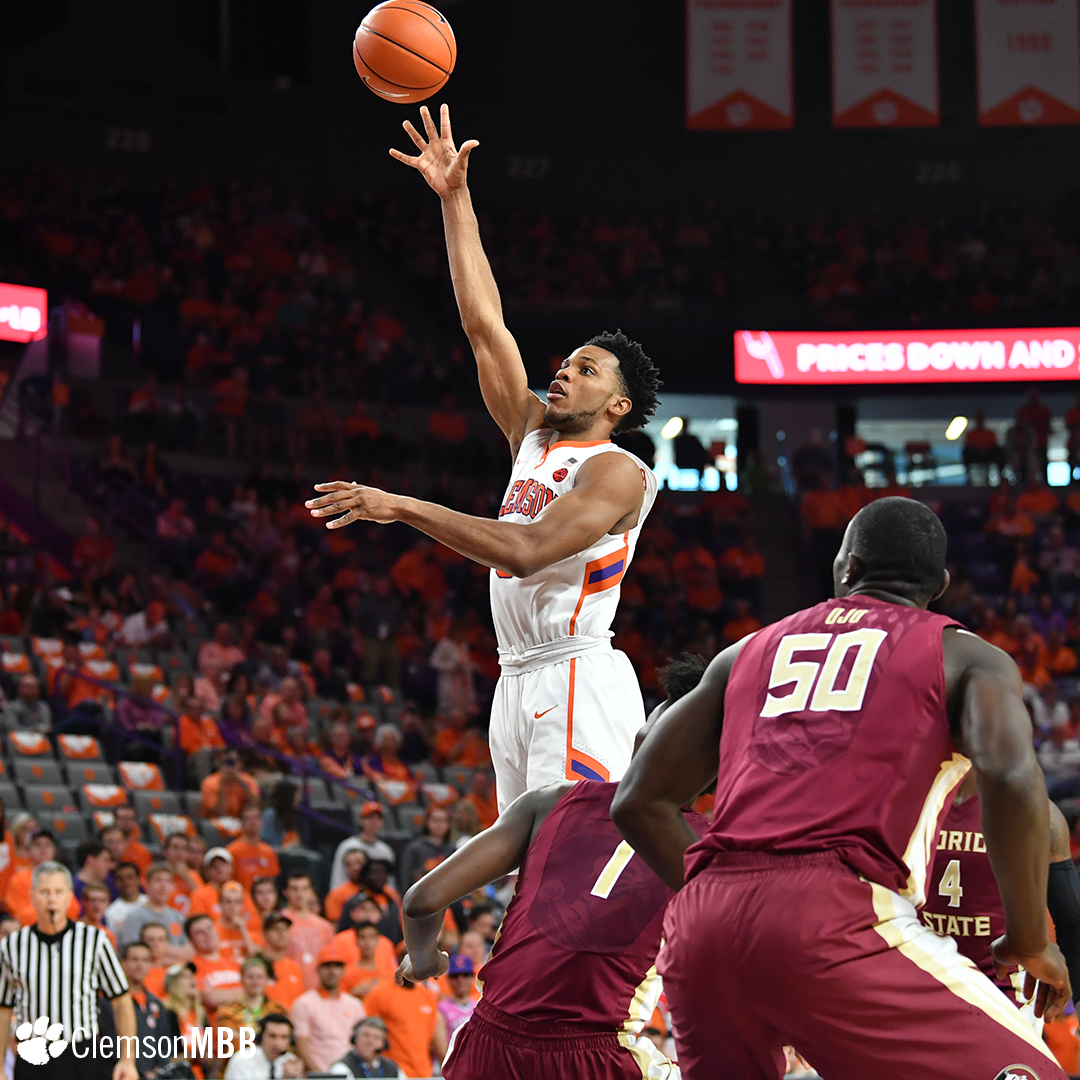 CLEMSON, S.C. — The Clemson men’s basketball saw a second straight game come down to the final possession, and this time a shot from Marcquise Reed fell short as the No. 19 Florida State Seminoles escaped a capacity crowd at Littlejohn Coliseum with a 76-74 victory. FSU improved to 23-6 on the season, 11-5 in the ACC. Clemson saw its record fall to 14-14 overall, 4-12 in league play.

The loss overshadowed the brilliant play from a pair of seniors in particular, Jaron Blossomgame and Sidy Djitte. The former posted 24 points and did not miss a free throw in nine attempts, while adding eight rebounds. It was Blossomgame’s 30th career game with at least 20 points. Djitte came off the bench to play 31 minutes and stockpiled 12 points and nine rebounds against one of the ACC’s tallest teams.

Xavier Rathan-Mayes was impressive for the Seminoles, posting 15 points and seven assists with just one turnover in 35 minutes of play. FSU shot just 45 percent for the game, a far cry from its 67-percent mark in the first meeting this season in Tallahassee. The ‘Noles were clutch at the line, shooting in 23 of 28 attempts. Clemson shot similar numbers, including an impressive 26-for-32 clip at the charity stripe.

The ‘Noles enjoyed a working margin most of the first half, but Clemson kept it at a five-point deficit or under for the final five minutes of the frame. Clemson actually cut it to 38-37 at intermission after a layup from Blossomgame. It capped a 5-0 run to end the first half.

The lead changed hands 10 times during the second half. After FSU had pushed its advantage to four at 54-50, Clemson rallied to a 7-2 run to take a one-point edge with 9:26 to play on a Reed basket. FSU fought back to a 69-64 lead with 4:22 to play, but Reed followed Shelton Mitchell’s second three-point goal of the contest with another bucket to push the Tigers in front, 71-69. Blossomgame’s three-point play had the Tigers still in front 74-71, but Rathan-Mayes hit two free throws and took advantage of a long rebound with a layup to give the ‘Noles the lead for the final time.

“I thought our seniors today really competed at a very high level. I don’t think Avry (Holmes) shot it as well, but he was very good defensively with energy. Sidy (Djitte), I thought, was fantastic. We really needed him today, and I thought he played a terrific game. Jaron Blossomgame was great, as well. That’s a hard team to play against. They do a great job of limiting touches and making it hard to get into rhythm. I think that was certainly evident early, when we were a little bit shaky with the ball and had a bunch of turnovers in the first 12 minutes of the game, but we settled down and played much better. Unfortunately, we just didn’t finish the game.”

On Clemson’s final shot of the game:

“We had a double screen going on for Avry, and if (Marcquise) Reed thought that Avry was open, he was going to pass it to Avry, and if he wanted to go score, he could go score. (Reed) backed them off, he spun, probably had a little more time that he realized and let it go a little quick. But he got to 12 or 13 feet from the bucket, and he’s our best player at that range. So that’s one you live with.”

On the close losses of late:

“You feel for the team because you know how hard they’re working and the time they’re putting in. It’s painful. It’s hard when you work and put your energy and effort and emotional side of you into all of these games, and you don’t get rewarded. That part is very difficult. Having said that, it’s hard not to be proud of this group of guys for the way that they’re playing in terms of good basketball.”

“Both teams were aggressive, and I thought both teams really took advantage of the pressure that the other team was putting on and put the officials in position to make calls. Teams are shooting 79 or 80 percent against us from the free throw line, and that’s part of what I’m talking about when I say that we have some bad possessions and allow the other team to go to the free throw line and beat us at the free throw line. In this game, it was basically even, so that really wasn’t the case. By and large this year, we’ve really done a good job of not fouling. We’re one of the teams that fouls the least in our league, so we’re usually pretty good on that. Today, we weren’t quite as good.”

On Donte Grantham’s performance in the starting lineup:

“I thought Donte (Grantham) played well today. I really did. And it’s not all about points with him. He was a better matchup for us. He basically played point guard again, kind of like at South Carolina, for about eight minutes, and I thought he was really good. He made a big three and had a nice back-cut lob. He really was out there because of his length and size to help guard Dwayne Bacon and Jonathan Isaac, and I thought he did well. Sometimes, that kind of goes unnoticed with his play. He had a really positive game in a lot of ways. His ball-handling and distributing were really good. His defense was pretty good. His size and length were factors in the game.”

“Coach (Brad) Brownell had his team very well prepared. They took us out of transition in the first half. I thought they did an excellent job against our pressure. We got some deflections and a couple steals early but the second half Clemson only had three turnovers. That means they did several different things to break down our pressure. Defensively, I thought they took us totally out of rhythm. We didn’t get a very good offensive flow because they took certain spots away from us on the floor. We couldn’t get the ball inside like we wanted to.

“It was a typical, very hard fought ACC game. This is the new ACC where regardless of who you’re playing, if the team is ranked, and regardless of your position in the league, anyone is capable of winning. We feel very, very fortunate to come on the road and beat a very good Clemson team. When you look back at the fact that they’ve lost nine games by six points or less, it says how close they are but that’s how it is with every team in the ACC. This was a very important game for us as well as them too. So we feel very fortunate to have some guys make some big plays. [Michael] Ojo came back in a gave us a couple big plays and some free throws. [Xavier] Rathan-Mayes didn’t score a lot of points the second half but he gave us tremendous leadership down the stretch. We got three stops in a row after not being able to defend them very well at all. I was very proud of our kids. They didn’t panic, they maintained their poise, and they came on the road and defeated a very good Clemson team.”

On comparison to last game in Tallahassee:

“It was much different. We’re definitely not 48 points better than Clemson. It was just one of those nights where we played exceptionally well and they got off to a bad start and we scored a lot from their turnovers. It wasn’t a typical Florida State – Clemson game. That game, we made 17 threes, forced 22 turnovers, and that will give you the opportunity to get out and get a lot of easy baskets. We knew real well that we would come in here today and this would be a dog fight.”

On respect for Clemson:

“We have a tremendous amount of respect for Clemson. That is one thing our guys have matured to. We have respect for everybody. We do not have the right to be cocky. We don’t have any reason at all to feel that way. We just lost a couple games on the road. We’ve watched enough film of Clemson and we have a very healthy respect for them. We knew, coming in here, that we had to be our best. Clemson probably played well enough to win the game, but we were just very fortunate to make a couple big plays down the stretch that gave us a chance.”

On the importance of a road win:

“There’s no doubt that this was an important game for us. It keeps us at pace with some of the other teams that are fighting for position in the ACC Tournament. Obviously, it gives us the opportunity now to go on the road and control our own destiny. Anytime you’re in a position like we’re in where you can control your own destiny, it motivates you and definitely gets your attention.”