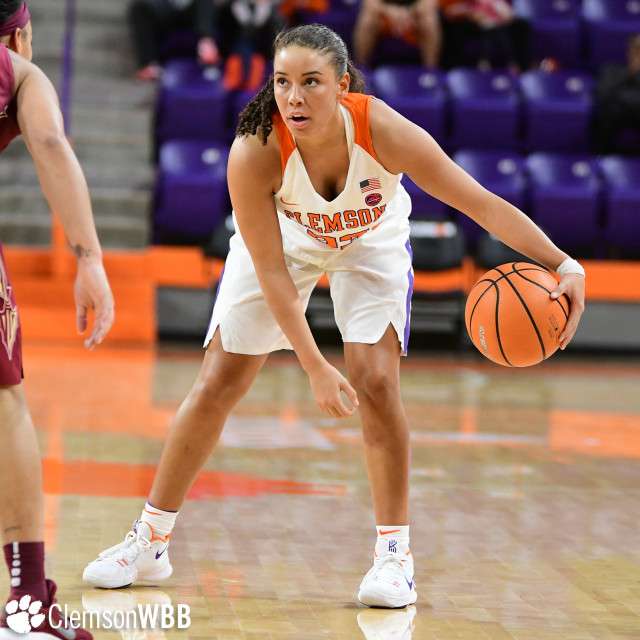 CLEMSON, S.C. – The Clemson women’s basketball team held No. 11/13 Florida State to its lowest point total of the season, but the Seminoles came out on top of the Tigers 69-47 on Thursday night at Littlejohn Coliseum. With the loss, Clemson dropped to 10-5 (0-2 ACC), while Florida State improved to 14-1 (2-0 ACC).

The Tigers started out the game with their usual steadfast defense, holding the Seminoles to just 16 points on 26.3% (5-for-19) from field goal range in the first quarter. Senior Ivy Atkism hit a jump shot in the paint 30 seconds in to the second quarter to cut the Clemson deficit to four points, 12-16, before Florida State pulled away a bit, outscoring the Tigers 15-6 in the period.

Clemson held Florida State to 31 points in the first half. It was the lowest halftime point total by the Seminoles all season, as they were averaging 43.7 points at halftime in the 14 games entering tonight’s. After a 16-16 third quarter, the Seminoles’ offense picked up in the final quarter, scoring 22 points to the Tigers’ 15.

The Clemson defense allowed Florida State to score just 69 points for the game, which was the Seminoles’ lowest point total of the season, and 19 points below their season average of 88.2 points per game. The Tigers also held the Noles to 37.3% from field goal range, 11.6 percentage points below their field goal shooting average for the season. The defense also forced Florida State to commit 18 turnovers, six more than their 12.0 per game average.

Senior Alexis Carter, who earned her first start of the 2017-18 season, led the Tigers with a season-best 16 points, while adding four assists. Atkism tied her career high in scoring with 12 points in the contest, on 5-for-6 from field goal range.

Clemson returns to action on Sunday, Jan. 7 on the road at Virginia. The game between the Tigers and Cavaliers tips off at 2 p.m. at John Paul Jones Arena in Charlottesville, Va.