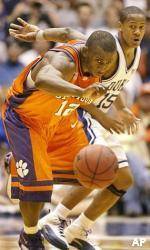 Sharrod Ford and Shawan Robinson combined for 37 points and 14-20 field goal shooting, but it was not enough as number-one ranked Duke defeated Clemson 81-55 at Cameron Indoor Stadium in Durham. Duke won its 17th straight game this year and improved to 20-1 overall, 9-0 in the ACC. Clemson fell to 9-11 overall, 2-7 in the ACC.

Ford led the Tigers with 19 points on 8-11 shooting. He also had six rebounds and two blocks in 26 productive minutes against the ACC’s top shot blocker Shelden Williams, who was shut-out in that category for the night. Ford made just 3-8 free throws, an area he had excelled in of late, as he had made 77 percent from the line over the last 13 games. Robinson added 18 points on 6-9 shooting, including 2-3 from long range. He has now scored 78 points in his last four games, all since he entered the starting lineup.

Akin Akingbala added six points and seven rebounds off the bench. He was the team’s top rebounder even though he played just 21 minutes. He also added a career high tying three steals. No other Tiger scored more than four points.

Clemson committed 22 turnovers, an area that has hurt the Tigers all season. Clemson did force 16 Duke turnovers. The Blue Devils out-rebounded Clemson 32-26. Clemson entered the game ranked first in the ACC in rebound margin. Duke also had the advantage at the foul line. Clemson made just 13-26, while Duke hit 27-32, including 9-10 by ACC free throw leader J.J. Redick, who led the Blue Devils with 23 points. Freshman Luol Deng had a season high tying 22 ponits on 7-10 shooting.

Clemson’s defense did a fine job defensively on three Duke starters who had traditionally played very well against Clemson. The Tigers held Chris Duhon to just two points and Shelden Williams to just five. It was a season low for both players and the first time all year either failed to score more than five points in the same game. Daniel Ewing, a third Duke starter, had just four points on 1-6 shooting. He had shot 50 percent from three-point range over his career against the Tigers.

The two teams played on even terms for the first 19 minutes of the game. Clemson held a 24-23 lead at the 4:13 mark after Robinson made a free throw, giving him seven consecutive Clemson points. Duke took a three-point lead on a bucket by Deng with 2:16 left, but Clemson came back and tied the game at 27 with 1:42 left on a three-point goal by Robinson, who had 14 of Clemson’s 27 first half points. Duke then went on a 9-0 run to close the half, including a three-point goal by Lee Melchionni at the buzzer to close the half.

Duke then scored the first five points of the second half to make it a 14-0 run, the second longest scoring run against Clemson this year. Clemson cut the margin back to 10 at 53-43 with 8:55 left on a layup by Sharrod Ford scored five field goals and 13 total points in the second half in his to keep Clemson within striking distance.

“Obviously we played an excellent basketball team tonight,” said Clemson Head Coach Oliver Purnell, who also brought his Dayton team to Cameron last year. “I liked our approach in the first half with the exception of not being able to keep them off the offensive glass. We felt going into the game if we could limit the easy baskets by Duke, which they have a habit of getting in transition off steals or the offensive glass-that we would have a chance to win.

“We shot the ball well against Duke, which is hard to do, but I thought the easy buckets on the glass and in transition cost us. Duke is awfully good. I see them getting nothing but better offensively from watching them at the beginning of the year. Obviously their defense is outstanding, and it looks like they’re expanding their depth a bit.”

“Clemson had eight days off and they were primed for us and they are well coached,” said Duke Coach Mike Krzyzewski. “They are getting better and better with their system under Shawan Robinson has really become a fine player. He’s really poised, he takes good shots, really works hard. I’m very impressed with him.

“Both teams played really good half court defense. What we were doing better in the second half was driving the ball.”