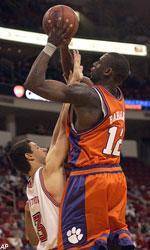 Julius Hodge had 23 points and senior Marcus Melvin added 15 to lead NC State to an 86-69 victory over Clemson on January 17 at Raleigh’s RBC Center. NC State improved to 10-3 overall, 3-1 in the ACC with the victory, while Clemson fell to 8-7 overall, 1-3 in the ACC.

Three-point shooting was the key for the Wolfpack as Herb Sendek’s team made 7-15, including 4-8 in the first half when NC State took a 17-point lead at intermission. Over the last five meetings between Clemson and NC State the Pack has made 59 three-point goals, compared to just 12 by Clemson.

Sharrod Ford led the Tigers with 20 points on 8-15 shooting from the field and 4-4 from the foul line. It was the most points Ford has ever scored in an ACC game and it was his third career 20-point scoring game overall. He has now made 31-38 free throws over the last seven games. He also had three blocked shots.

Two other Tigers scored in double figures for Clemson. Olu Babalola had his finest outing against an ACC team this year with 10 points, five assists and no turnovers. It was his first game without a turnover all year. He also had a team best six rebounds in his 30 minutes. Vernon Hamilton had 10 points, five rebounds and two steals and had just two turnovers. Shawan Robinson, a native of Raleigh, added eight points, while Akin Akingbala scored six points on 3-4 shooting.

Clemson scored the first bucket of the game on its first possession on a jumper by Ford, but the Pack then went on a14-0 run, the longest run of the year against Clemson, to take a 14-2 lead at the 14:16 mark. NC State kept that double digit margin the rest of the first half. Clemson cut the margin to 11 at 25-14 on a jumper by Babalola with 7:12 left, but the Pack ran the lead back to 18 at the 5:08 mark on two free throws by Engin Atsur.

Clemson continued to battle and forced some turnovers over the next six minutes and cut the lead back to 14 at 76-62 with 4:10 left. But the Tigers could not cut the margin any further. A layup by senior four-year walk-on Beau Shay with 26 seconds left cut the lead to 15 points and was certainly a bright spot for Clemson down the stretch.