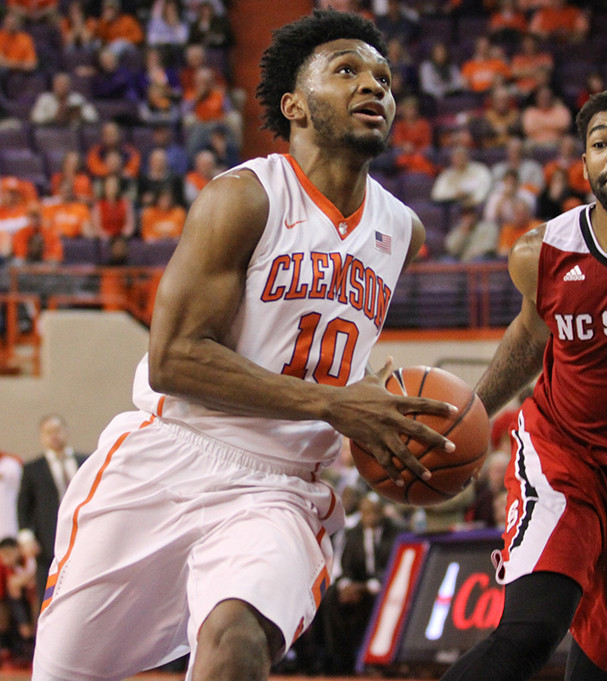 CLEMSON, S.C. — The Tigers dropped its home finale and last scheduled game in Littlejohn Coliseum, falling to the NC State Wolfpack by a score of 66-61 Tuesday. With the loss, Clemson fell to 16-13 overall, 8-9 in the ACC. NC State upped its record to 18-12, 9-8 in league play.

Clemson could never find its rhythm shooting the ball, finishing the game with a 30 percent clip.  Despite the poor offensive performance, the Tigers held a 33-32 lead with 13:04 remaining in the game, but that’s when NC State went on a 20-2 to seize the lead for good. The Wolfpack were lethal from long range, shooting 45 percent from behind the arc, including 5-of-9 attempts in the second half.

The opening half of play was a back and forth affair that featured 10 lead changes. Clemson held the largest lead of the half at five points, while the largest State lead was only two as the Tigers clung to a 21-20 lead at intermission.

Gabe DeVoe provided a late spark off the bench, leading the Tigers (16-13, 8-9 in ACC) in scoring with 18 points in only six minutes of play.  DeVoe entered the game with just 11 total points on the season. Another freshman, Donte Grantham, added 12. Jaron Blossomgame led the way with 10 rebounds. The Wolfpack were paced by Ralston Turner’s 23 points.

The Tigers conclude the regular season Saturday at 4 p.m. against the Notre Dame Fighting Irish in South Bend, Ind. Notre Dame defeated Clemson in a close matchup, 60-58, in Littlejohn on Feb. 10.

[View the story “Clemson vs. NC State” on Storify]