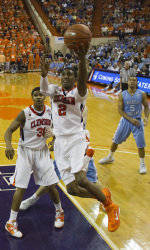 Tigers Fall to N.C. State on the Road Thursday Night

Tracy Smith added 14 points for the Wolfpack (14-11, 4-7 Atlantic Coast Conference), who pushed ahead for good with a 9-0 second-half run. The win allowed N.C. State to gain some measure of revenge for last month’s loss to the Tigers in which the Wolfpack blew a 19-point first-half lead.

Javi Gonzalez added 11 points off the bench for N.C. State, which made 11 of 14 free throws in the final 4 1/2 minutes to stay in control.

Demontez Stitt scored 16 points to lead the Tigers (17-9, 6-6), who are fighting to position themselves for an NCAA tournament bid.