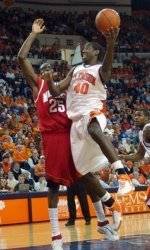 CLEMSON, S.C. (AP) – D.J. Strawberry had 22 points and Maryland reached 20 victories for the first time in three years with an 82-66 win over Clemson on Sunday.

The Terps (20-7, 6-6 Atlantic Coast Conference) saw its 12-point second half lead slip to 59-58 on Cliff Hammonds’ driving basket with 8:19 to go. But Strawberry, despite the Clemson crowd’s singsong chants of “Darryl, Darryl” about his famous baseball playing dad, scored eight of Maryland’s next 15 points to regain control, 74-63.

Strawberry, a senior, finished a point shy of his career-best he set against Siena this past December. The Terps hit the 20-win mark since going 20-12 in 2003-04. That was also the last time they reached the NCAA tournament.

For Clemson (19-7, 5-7), the loss continued a slide that began when these two teams met for the first time this season on Jan. 13. Then the Tigers came as the nation’s last Division I unbeaten at 17-0 before Maryland ended that distinction with its 92-87 victory.

Clemson has gone 2-7 since its perfect start.

But Strawberry had a nifty drive to make it 64-58. After James Gist scored on a putback, Strawberry made two foul shots. By the time Strawberry got free for an easy layup, Maryland was back in front 70-63.

Clemson could not catch up.

Hammonds hit four of Clemson’s six 3-pointers and led the Tigers with 16 points and a career-high 10 assists.

Maryland didn’t miss much the first half, hitting 19 of 30 (63.3 percent) from the field. Most of those were near the goal, the Terps running straight at Clemson’s defense.

Strawberry and Vasquez led the charge, driving to the goal for easy layups. When the Tigers cut off the easy layup, Gist was there in the post to finish. Gist was 5-of-6 shooting the first 20 minutes and finished with 12 points.