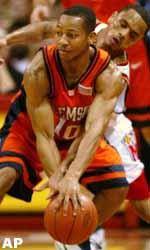 Considering the fallout after the Terrapins’ loss to top-ranked Duke last season, the Maryland coach shouldn’t be blamed.

Juan Dixon scored 23 points and Lonny Baxter had 21 as No. 3 Maryland rebounded from a loss to top-ranked Duke by holding off Clemson 99-90 on Sunday night.

“We had to do everything possible to win that game,” Williams said. “We came back and played well enough to win. I’m not satisfied with how well we played, but teams have lost these types games this year in college basketball so I was glad to get the win.”

After losing to Duke last January, Maryland lost four of its next five games, culminating with an embarrassing home upset to last-place Florida State.

Adding to Williams’ concern was the fact Clemson beat No. 10 Virginia earlier this season.

“I was worried for those two reasons. Because of what Clemson did against Virginia and because I knew this game would be tough after the Duke emotion,” Williams said. “We had to put that behind us and win tonight.”

Dixon, held to 10 points in the Terrapins’ 99-78 loss to the Blue Devils on Thursday, hit four 3-pointers to become Maryland’s career leader in 3s with 189. He surpassed the previous mark held by Johnny Rhodes (186).

Baxter did most of his scoring close to the basket, coming within four points of a season-high. He shot just 5-for-12 from the line.

Chris Wilcox had his third career double-double with 17 points and a career-high 14 rebounds for Maryland (14-3, 4-1 Atlantic Coast Conference). The Terrapins committed a season-low six turnovers and beat the Tigers for the eighth straight time.

Tony Stockman made six 3-pointers and scored 22 points for Clemson (11-8, 2-4). Jamar McKnight added 20 points and Edward Scott had 19 for the Tigers, who tied a school record with 15 3-pointers.

“We knew if we could jump on them early they might get down and doubt themselves,” Stockman said. “Any team coming off a tough loss is a little vulnerable. We’re a good team that can do some things in this league, and we came in here tonight thinking we could win.”

Clemson outrebounded Maryland 49-37 and trailed only 86-85 with 2:57 remaining. Drew Nicholas scored seven of his 13 points in a one-minute span to increase Maryland’s lead to 93-86 and the Terps held on from there.

Byron Mouton added 14 points for Maryland, and Steve Blake had 13 assists. However, Williams was not happy his team was outrebounded 50-40 and allowed Clemson to shoot 53.6 percent from 3-point range.

“Defensively we have to get more emotional, we were a little flat tonight and it almost cost us,” Williams said. “It’s kind of exciting to outscore the NBA when we play, but that doesn’t work when the other team does too.

“If we can ever combine that type of offense with better defense, we have a chance of being a very good team.”

Ray Henderson scored 11 points and matched a career-high with 13 rebounds for Clemson, which lost its third straight conference game. Chris Hobbs had 12 points.

Maryland outscored Clemson 10-3 in the first 4:08 of the second half. Baxter started the surge with an inside move and Dixon capped it with a dunk off a fastbreak, giving the Terrapins their largest lead at 62-51.

Clemson answered with a 12-1 run capped by Dwon Clifton’s layup that tied the game at 62. Five Tigers scored during the surge, which featured a 3-pointer by Stockman.

There were five more ties before Clemson moved ahead 81-80 on Sharrod Ford’s free throw with 5:39 remaining. It was the Tigers’ first lead since the 5:09 mark of the first half. That lead was short-lived as the Terrapins scored on their next possession, igniting a 16-7 run.

“I liked the court presence, demeanor and improvement this team has shown,” Clemson coach Larry Shyatt said. “I thought we played harder and smarter than we had of late. We did an excellent job on the glass against a talented team. I’m just disappointed we didn’t make more free throws and hit more shots down the home stretch.”

The high-scoring first half featured 15 lead changes as Maryland pounded the ball inside and Clemson countered with 3-point shooting. Baxter had 13 points and Dixon scored 12 as the Terrapins used a late 8-0 run to take a 52-48 lead at the break.