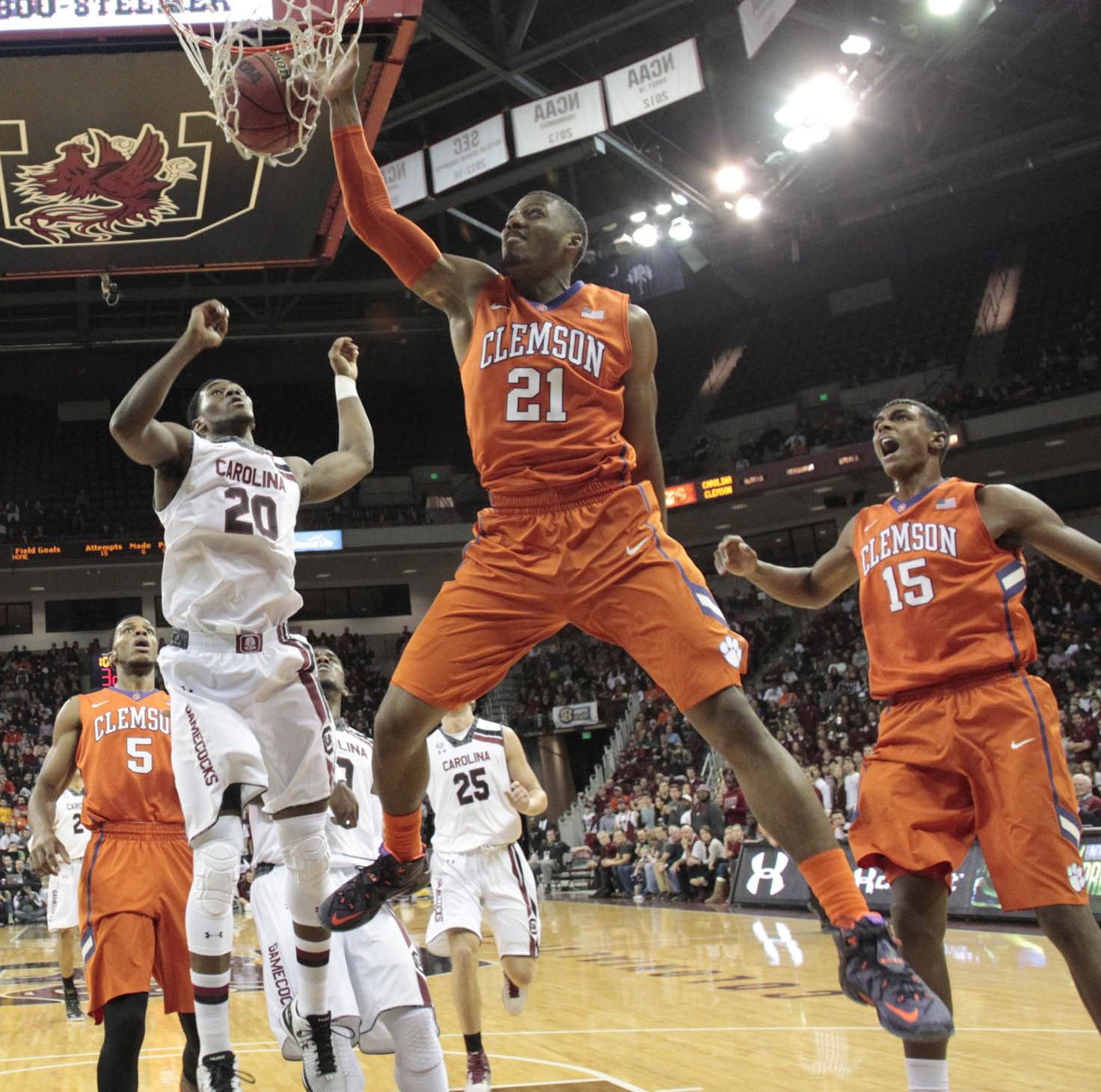 COLUMBIA, S.C. — In a game of runs, the South Carolina Gamecocks outmatched the Clemson Tigers 68-45 Friday night in Columbia. The Gamecocks were led by sophomore Duane Notice, who finished with 19 points including two pivotal three-point field goals to help sway the game in the Gamecocks’ favor. The loss dropped Clemson to 6-4 on the season and improved South Carolina to 6-3.

The Gamecocks jumped to an early 19-7 lead, but a one-handed Damarcus Harrison slam sparked a 12-4 run to breathe new life into the Tigers. After a back and forth affair to end the half, Clemson was able to take the lead on a Rod Hall layup with seven seconds remaining to enter the half ahead 30-28.

The Gamecocks would regain the lead in the early second half, a lead that would not be relinquished the remainder of the game.

One of the keys to the Tigers’ late first half success was the switch from a man-to-man defense in favor of a zone defense. Clemson forced turnovers that were converted to easy points and South Carolina struggled shooting against the zone.

Brad Brownell and company returned to the zone to begin the second half, but the Gamecocks were more successful. Notice hit a contested three to stretch the lead to 44-36 and South Carolina would hit consecutive threes on the ensuing possessions to place the game firmly out of reach.

“I think they turned it up another notch in the second half,” Brownell said. “They made three threes in a row that really blew the game open. Offensively it was hard for us, once they got the crowd into the game and got some momentum it was tough sledding for us.”

Jaron Blossomgame scored 14 points to pace the Tigers. Clemson returns to Littlejohn Coliseum to face Oakland at 7 p.m. on December 22.

• Jaron Blossomgame reached double figures for the ninth time in 10 games. The sophomore led the Tigers with 14 points, the third time he has led Clemson in scoring.

• Damarcus Harrison continued his solid play with 10 points and two blocks in 28 minutes. He made two three-point goals to bring his career total to 79, most by an active Tiger.

• Sidy Djitte played 22 minutes off the bench, his second-highest total as a Tiger in 43 career games.

• Djitte matched his season high with four points and set career highs for blocks (2) and steals (2).

• Jordan Roper collected three steals Friday, matching his season total entering the game. The three steals were the most by Roper since he also had three at Miami his freshman season in 2012-13.