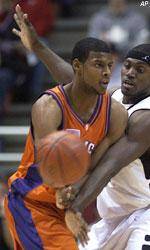 Sharrod Ford scored 15 points and pulled in 10 rebounds, but it was not enough to offset 16 points by Tim Pickett and 50 percent shooting by the Seminoles team in Florida State’s 65-52 win over Clemson on Saturday afternoon. Clemson fell 9-13 overall, 2-9 in the ACC, while Florida State improved to 17-8 overall, 5-6 in the ACC.

Clemson had a season low 13 turnovers, including just four in the second half. It was just the second time in the last 17 games that Clemson forced more turnovers than is committed. But the Tigers made just 37 percent of its shots overall, 21.4 percent from behind the arc. The Seminoles made 22-44 shots from the field and the 50 percent mark was the best against Clemson all year. It was the first time a Clemson opponent had shot at least 50 percent since Florida State did it in the 2003 ACC Tournament in Greensboro.

Ford’s double-double was his fifth of the year and 11th of his career. He had three offensive rebounds to go with his 10 total rebounds and also made 7-10 free throws. He added two blocked shots in playing a career high tying 35 minutes.

No other player scored in double figures for the Tigers, who got nine points apiece from starting guards Chey Christie and Shawan Robinson. Robinson had seven points in the first half and Christie had seven in the second half. Christie also did a fine job defending Pickett for much of the second half when the FSU senior failed to make a field goal and had just one point. Chris Hobbs made 3-4 shots from the field and has now made 6-7 over two games, but he fouled out after just 19 minutes of play.

Florida State took a 12-point lead at the 12:27 mark on a three-point goal by Wafer. But, Clemson would not give in and went on a 8-0 run to cut the lead to 48-44 at the 9:43 mark on a steal and dunk by Chris Hobbs was called for a technical foul and his reaction to the call drew a technical foul, his fifth personal of the game.

Florida State got just one point out of the possession, but the Seminoles quickly moved the lead to 10 again at 54-44 with 7:27 left. Clemson cut the lead to eight at 54-46 with 5:48 left on two free throws by Christie. But, Clemson never got the differential under double figures the rest of the game.

It was the second time this year Clemson has lost a game by exactly a 65-52 score. Maryland downed Clemson by that score on January 25 at Clemson. It was Clemson’s sixth straight loss at Florida State. Clemson had won the game earlier between the two teams, 53-48 on January 13.

“We gave good effort today, especially when you take into account that we were playing just 40 hours after the game with Wake Forest,” said Clemson coach Oliver Purnell. “We played hard throughout, and we had a season low in turnovers (13). We did not rebound as well as we have and Florida State shot the ball well. Give Florida State credit, they made some key shots.

“We cut the lead to 48-44 and that was a key time in the game. We lost the momentum when Chris (Hobbs) fouled out.

“We have another opportunity against a top 20 team on Wednesday night against NC State, who is playing as well as anyone right now.”