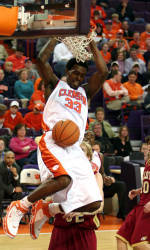 CLEMSON, S.C. (AP) – Colin Wyatt and Montell Watson had 15 points each as Elon got its first victory over a Division I opponent this season in a 74-69 win over Clemson on Friday night.

The Phoenix (3-9) had only beaten NCAA Division III Guilford and Southeastern College of Lakeland, Fla., a member of the National Christian College Athletic Association.

But Elon of the Southern Conference finished with five players in double figures at Littlejohn Coliseum to end a four-game losing streak.

The Tigers (11-2) had started 11-0 and won the San Juan Shootout last week. But their fast start ended Wednesday night with a 72-69 loss to Georgia.

Elon was supposed to be Clemson’s final tuneup before it opened the Atlantic Coast Conference season against Florida State next Wednesday. Instead, the Phoenix showed Clemson’s got more work ahead.

Elon trailed 36-35 at the half, but built a five-point lead to start the second period.

After that, Elon gradually pulled away as Clemson struggled from the floor. The Phoenix went on a 15-5 run the next six minutes to lead 69-57 with 3:07 to go.

The Tigers were only 1 of 13 from the field during that stretch.

Sam Perry had five straight points and Vernon Hamilton two foul shots as Clemson cut the lead to 69-64 with 1:17 left. But a field goal by Waters and two free throws by Watson sealed the upset for the Phoenix.

Hamilton led Clemson with 13 points, while Akin Akingbala had 12 and eight rebounds.