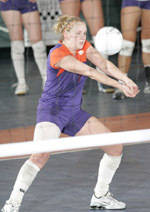 CLEMSON, SC – The Clemson volleyball team fell to the Boston College Eagles, 3-1, on Friday night. The Tigers forced the fourth game after being down 2-0 and managed to erase 20-8 deficit in the final game to come within one point of the Eagles. Clemson could not close out the game, however, and suffered the loss. Boston College improved to 6-9 overall and 1-5 in ACC action, while the Tigers dropped to 8-5 overall and 3-2 against conference opponents.

Brittany Ross led all hitters with 22 kills, hitting .340 for the night. Danielle Hepburn contributed seven kills and six total blocks for the Tigers, while Anna Vallinch tallied 21 digs in the contest. The Eagles were led by Allison Anderson, who recorded 21 kills, 20 digs and four service aces.

Clemson trailed for the majority of the final game and by as much as 12 points, but the Tigers put together a comeback. Down 22-13, Sue Eckman served seven straight points for Clemson to bring the team within one point of the Eagles. Boston College pulled away, 28-22, on Anderson’s serve and then won the game, 30-26, to post the victory.

The Tigers will host 25th-ranked Maryland on Saturday at 6:00 PM. Fans can follow the action via livestats on www.clemsontigers.com