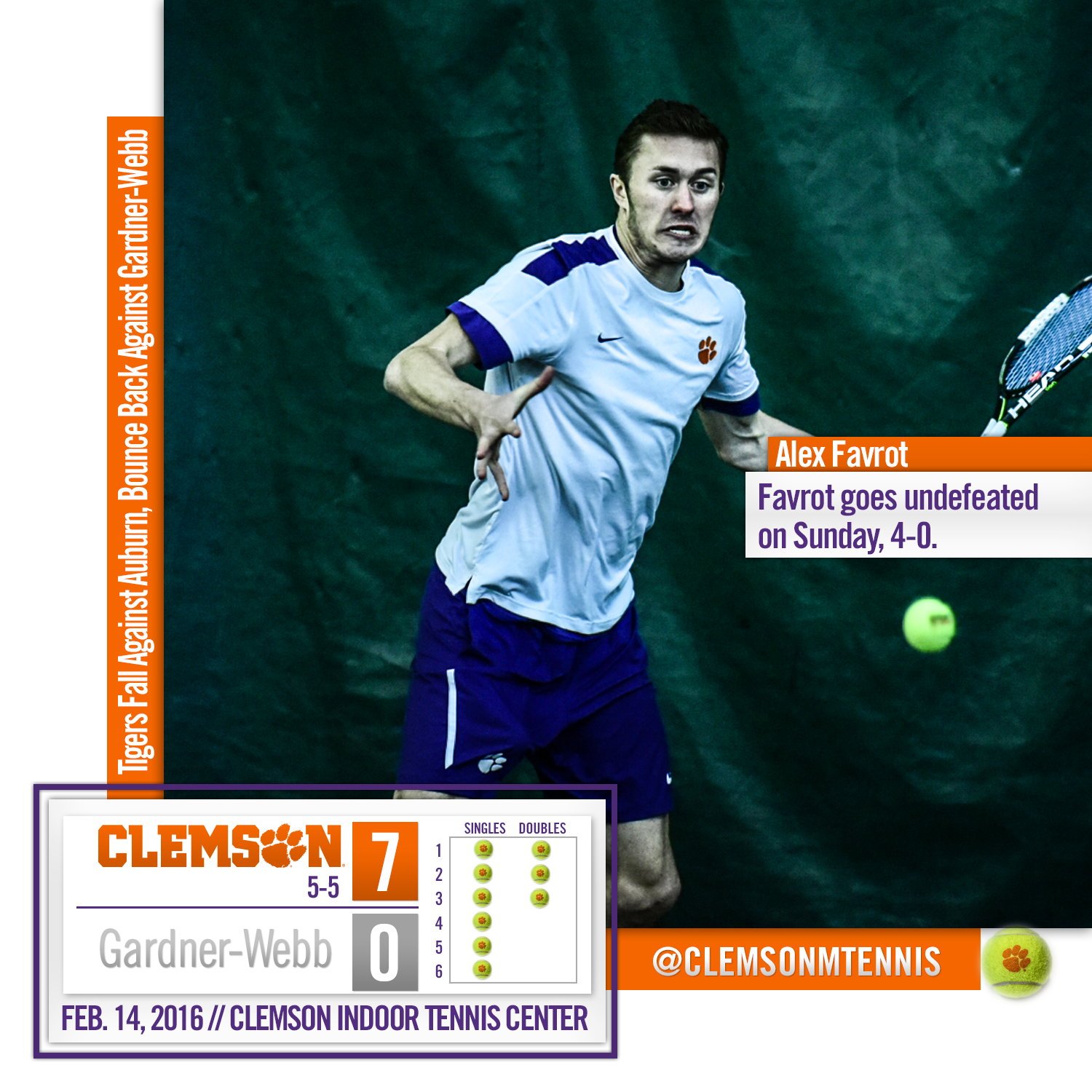 Tigers Fall to Auburn, Bounce Back Against Gardner-Webb

CLEMSON, S.C. – Clemson dropped a hard fought match to Auburn on Sunday morning at the Clemson Indoor Tennis Facility, 4-3. The Tigers bounced back in the nightcap against Gardner-Webb winning in commanding fashion, 7-0. The second match was clinched after a win on court two. With the split Clemson brings its record to 5-5 on the season.

“Today was painful but today was progress. We are improving with each day, doubles looked better, and our top three were dominant again,” said Assistant Coach John Boetsch. “Brent Lett showed a lot of heart out there today as well. Strength coach Chandler Geller has done a great job with the guy’s fitness and they are excited about finishing this non-conference schedule strong.”

In the first match of the day, Auburn clinched the doubles point over Clemson, winning on courts two and three. Alex Favrot and Luke Johnson defeated the 60th nationally ranked doubles team 6-2 on court one. Auburn then then won 7-5 on courts two and three. Daffra Sanon and Robert Dudley dropped a hard fought match at number three. Austin Ansari and Arturo Pinazo battled from behind before falling 7-5 on court two, resulting in the clinched point by Auburn.

In singles play, Clemson gained three points from courts one, two and three. For the second straight week Johnson started the winning in two sets, 6-1, 6-4 at number three. Sanon fought back from a first set loss to win two straight sets 6-2, to tie the match at two points a piece. Favrot then defeated #84 Marko Krickovic in three sets to give Clemson the lead 3-2. Lett and Ansari led 3-0 in their third sets, before falling to their foes from Auburn, 6-3, clinching the match 4-3.

In the Gardner-Webb match, Clemson swept the doubles matches. Alex Favrot and Luke Johnson won on court one, before Austin Ansari and Arturo Pinazo outmatched their opponents, 6-2, at number two doubles to clinch the point for the Tigers. The doubles point sweep came when Sanon and Dudley won on court three, where they defeated Gardner-Webb 6-4.

Johnson continued his winning ways, winning eight straight matches including doubles matches, defeating his opponent on court three, (6-4, 6-1). Favrot also continued his strong play winning his singles match on court one, (6-1, 6-4) giving the Tigers a 3-0 lead over Gardner-Webb. Sanon battled for three sets on court two, winning the final set by blanking his Bulldog opponent 6-0. Pinazo, Ansari and Lett all won on their respected courts to complete the sweep for the Tigers.

Clemson returns to the courts this Friday when the Tigers host Winthrop for a doubleheader. The Tigers first match will be at 1 p.m. followed by a 5 p.m. start time. Pending weather, the matches will be played at Hoke Sloan Tennis Center.