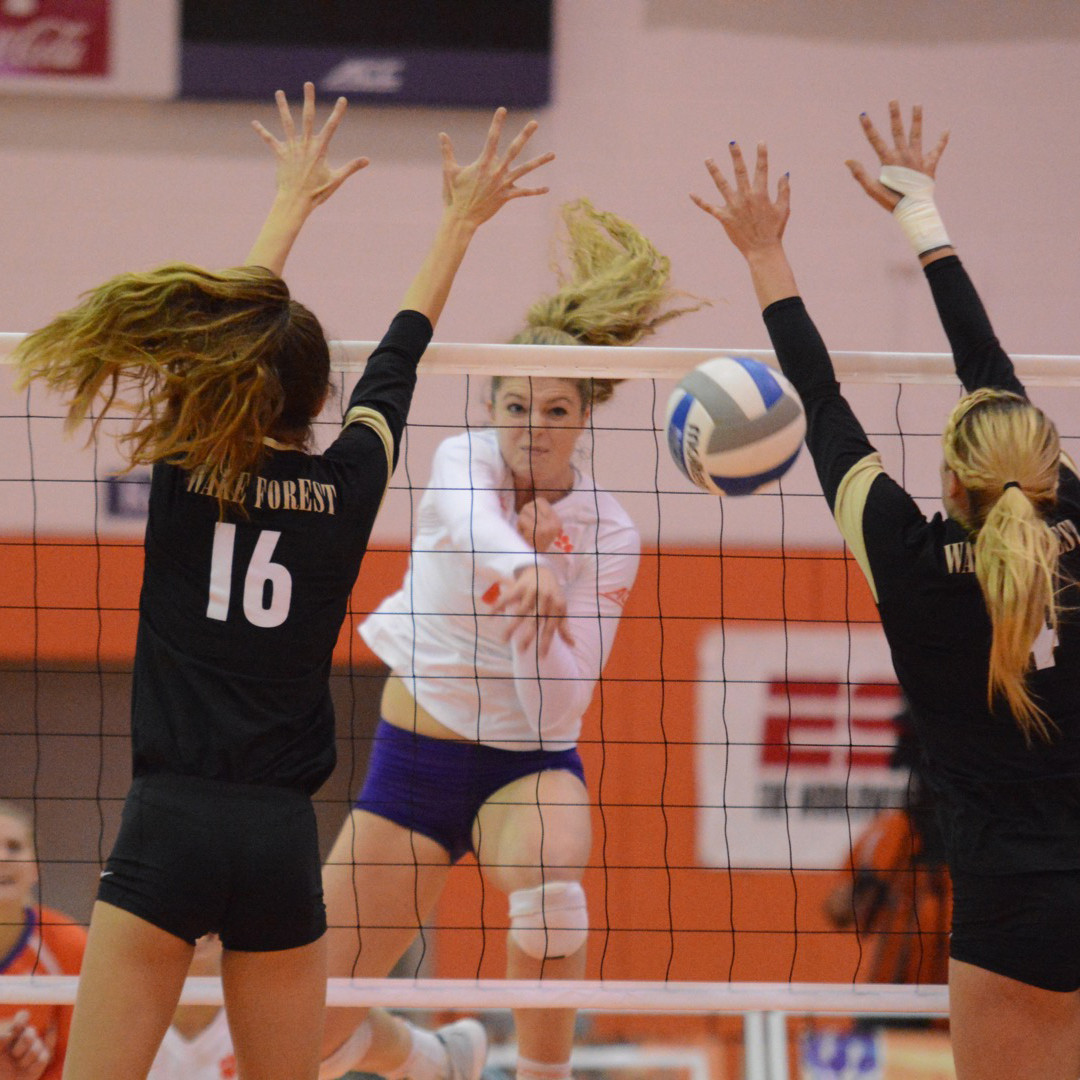 “It’s difficult because they’re a proud group, a competitive group and they were disappointed afterwards, and that’s hard to watch as a coach because for me, I’m proud of them,” said head coach Hugh Hernesman. “I told them to keep their heads high. They got to a level of play we need to be at and that’s not always easy, but for me, that’s progress. We haven’t been able to consistently be there and get to that place. I thought today we did.”

Leah Perri led the offense with her fourth match with 20 or more kills, finishing with 21 kills and 14 digs to earn the double-double. After the offensive effort from Perri, she needs just 25 more to earn her 1,000th career kill.

Kate Federico did it all for the Tigers while recording her ninth double-double of the season. Clemson’s setter finished with a season-high 52 assists, 14 digs, seven kills on 15 attacks with an error for a .400 hitting percentage and three service aces. The duo assisted on the block as well as Federico denied four attacks while Perri picked up three block assists.

Clemson gained a significant offensive boost from its middles as they combined for 24 kills on the night with a .333 hitting percentage. Megan McGinley led the group, killing 50% of the balls she was set with 16 kills on 32 attempts and five errors giving her a .344 hitting percentage. Alex Lynch dropped six kills with just one error on 17 attacks for a .294 hitting percentage. Combined they recorded eight blocks, five of which were denied by McGinley.

Kailey Harvell fueled the offense late, recording nine kills in the final three sets on 20 attacks with just one error giving her a .400 hitting percentage on the night. Sydney Moseley completed the match just two kills away from double-figures, finishing with eight kills to go along with 10 digs.

Keelie Arneson led a defense that included five Tigers with double-figure digs. Her 20 digs on the night give her 2,559 in her career, advancing her to 11th all-time in NCAA history and just 26 shy of 10th. Kennedy Wilson-Talmadge came up big in key moments for Clemson as she finished with 15.

Both teams came out swinging in the first, however it was the Demon Deacons who won the longest set of Clemson’s season, 33-31. Perri dropped 10 kills and Federico assisted on 19 of Clemson’s 31 points in a set that consisted of 21 tie scores and eight lead changes. McGinley was well on her way to one of her best offensive efforts of the season with six kills on nine errorless attacks.

After dropping a close second set, 21-25, the Tigers fired out of the break to win the next two sets. Harvell’s five kills on 13 attempts with just one error for a .308 hitting percentage paced the offense as Federico contributed with nine assists and eight digs in the 25-23 victory. Lynch was three-for-four on attacks without and error to hit .750 in the set.

In the fourth, the Tigers battled to win it 25-22 after Harvell, Federico and McGinley combined for 10 kills on 16 attacks without an error to hit a combined .625 in the set. Federico added 10 assists as well while Arneson dug out 10 of Wake Forest’s attacks.

The fifth set saw six tie scores an three lead changes and it was looking good for the Tigers in the beginning after they led, 5-3. However, Wake Forest battled back and eventually threatened the Tigers with a 14-12 score for match point. Despite being just one point away from a loss, Clemson fought back as Lynch tied the set at 14 with a kill. The Demon Deacons won the next point and the match was sealed, 16-14 in favor of Wake Forest on a net violation called on the Tigers.

Clemson is back in action on Sunday against Duke at 1:00 p.m. The match is scheduled to be Clemson’s Senior Day as the Tigers will honor Keelie Arneson, Lou Davis and Alex Lynch for their service and achievements as a Clemson Tiger.