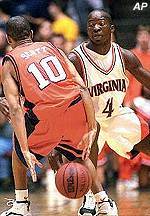 Hand scored 21 points while Solomon, who scored 43 against the Cavaliers when Hall sat out a 98-91 Virginia victory on Jan. 15, had just 13 as Hall and Mason denied him the ball, overplayed him and contested his every shot.

Hand, who scored all 17 points in the second half of Virginia’s 88-82 victory against North Carolina State on Saturday, hit two 15-foot fadeaways in the first 2 1/2 minutes and added two 3-pointers three minutes apart late in the half.

With Solomon having a hard time getting the ball and missing 7-of-8 shots in when he got it – his only field goal came when Chris Williams was called for goaltending with 3:30 left – the Tigers shot just 31 percent in the first half.

Virginia didn’t let up out of the locker room, either, getting consecutive 3-pointers from Williams and Hand 32 seconds apart early and an 11-3 run capped by another three from Williams that made it 55-30 with 13:46 remaining.

Adam Allenspach led the Tigers with 15 points and 10 rebounds.