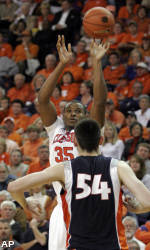 CLEMSON, S.C. (AP) -Mike Tisdale hit the go-ahead jumper with 41 seconds left, then blocked David Potter’s driving shot on No. 18 Clemson’s next possession as Illinois rallied from 23 points down for a 76-74 victory Wednesday night.

The Illini (5-2) looked finished, down 51-28 early in the second half and with leading scorer Demetri McCamey saddled with three fouls and two points.

But Illinois finally got going with a 35-10 run to move in front in the school’s biggest comeback ever.

Demontez Still missed a driving shot at the buzzer for Clemson (6-2).

Mike Davis led the Illini with 22 points. He set a career high with 28 a year ago when Clemson defeated Illinois in a challenge game by the same score, 76-74.

Brandon Paul had 20 points for Illinois, whose biggest previous rally came in 2000 when it came from 21 points down to defeat Seton Hall, 87-79.

Still led the Tigers with 15 points. Leading scorer Trevor Booker had just three of his 12 points in the second half.

Then Illinois got going. Davis had nine points and Paul and D.J. Richardson hit two 3-pointers apiece in a 35-10 run.

It’s the third time in the past four seasons Clemson has lost a sizable lead at Littlejohn Coliseum. In 2007, Virginia used a 19-2 run to win 64-63. Then last February, Florida State went on a 23-4 second-half spurt to beat the Tigers 65-61.

The Illini, who lost their past two games to Utah and Bradley, were crisp at the start and hit their first four shots.

They tied the game at 19 on Paul’s jam with 10:19 to go in the first half. Then it all fell apart for Illinois as Clemson closed the half with a 28-8 run.

With Tigers up 23-19, McCamey picked up his third foul and went to the bench.

When 5-foot-9 Andre Young squeezed past Tisdale, Illinois’ 7-1 center, for a layup, a loud noise that sounded like a coach’s clipboard hitting the floor came from the Illini bench. Illinois coach Bruce Weber was quickly called for a technical foul by official Bryan Kersey.

“I didn’t do anything. What did I do?” he shouted as Kersey moved to the other side of the court.

Moments later, Booker collected a loose ball and was yanked to the ground by Dominique Keller, who drew an intentional foul. Keller quickly helped Booker to his feet.

When Booker made his free throws, Clemson was ahead 39-25. The Tigers eventually led 47-27 at halftime, a lead that seemed safe until Illinois’ second-half surge.