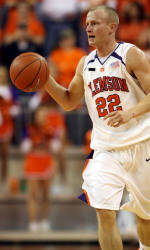 The Tigers (21-8, 9-6 Atlantic Coast Conference) were coming off the largest second-half deficit in school’s history with a 73-70 victory at Maryland five days ago. But Clemson never led after Moe Miller’s 3-pointer with 11:52 left in the game.

Terrence Oglesby, who hit the winning 3-pointer against the Terrapins, missed a 26-footer with 22.5 seconds that would’ve tied the game at 76.

After Cliff Hammonds made one of two free throws, Clemson coach Oliver Purnell was furious when Peacock wasn’t called for a foul on K.C. Rivers’ missed layup.

Neither team scored a field goal after Clemson guard Demontez Stitt’s 3-pointer cut the lead to 74-72 with 2:16 remaining.

Anthony Morrow led Georgia Tech (13-16, 6-9 ACC) with 16 points. Peacock, one game after scoring a career-high 23 points in a loss to Virginia on Monday, finished with 12 points and eight rebounds.

Clemson is attempting to earn an NCAA tournament bid for the first time since 1998.

Purnell, now in his fourth season, led the Tigers to the NIT the last three years. But any ACC team that has won nine league games and 20 overall has made the NCAA field. Clemson, which hosts Virginia Tech in the regular-season finale Sunday, was seeking to tie a school record in victories last matched in 1989-90.

James Mays’ putback gave the Tigers a four-point lead with 14:29 remaining, but Clemson was outscored 31-22 down the stretch.

Oglesby scored 15 points to lead Clemson, which had won four of five to return to the Top 25 for the first time since Jan. 14. Mays finished with 13 points and nine rebounds.

Gani Lawal and Jeremis Smith each had 13 points for Georgia Tech.