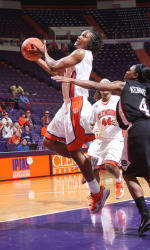 Tigers Fall in WBCA Classic Final to No. 1 Connecticut, 87-48

STORRS, CT – The Clemson Lady Tiger Basketball team put up a valiant effort, but fell at top-ranked UConn (6-0), 87-48, in the final game of the WBCA Classic. The Tigers (4-3) will take on Northwestern on Thursday in Evanston, IL.

Clemson came out with energy in the second half, especially defensively, holding the high-powered Huskies to only 33 points in the half. Additionally, Clemson held UConn without a field goal for two separate spurts of longer than four minutes in the half. The Tiger defense also held the Huskies to 2-15 from outside the arc, as the Huskies came in shooting better than 40.0%

The Tigers closed the gap to 24 for much of the half, before Connecticut pulled away down the stretch.

South Carolina native Kalana Greene posted 28 points, 16 coming in the second half to lead the Huskies, while Clemson held National Player of the Year candidate Maya Moore to her season average of 19 points.

Lele Hardy led Clemson with 17 points, as she shot 4-6 from long distance on the night despite constant pressure. Lindsay Welker had a career-best 11 points on 5-7 shooting in her second career start. Hardy and Welker were the only two in double-figures. The Huskies did a solid job on the glass as well, outrebounding the Tigers 43-28 in the ball game.

Hardy’s three on the first possession gave the Tigers a 3-2 lead, marking the first time all season that the Huskies have trailed in a game.

With the Huskies ahead 31-18, Hardy drilled another three form the wing, forcing Auriemma to take a timeout. UConn responded with an 11-0 run, eventually taking a 23-point advantage at the under-four media timeout. Connecticut use two late steals-turned-layups at the end of the half to take a 54-27 lead into halftime.

UConn had 18 fast break points to help build the advantage, also attempting 15 free throws to Clemson’s three in the half. The Huskies hit on 80.0% of their shots form the charity stripe in the half.

Clemson had little answer for Tina Charles, the Tourament MOP, who had 20 points and eight rebounds in the first half.