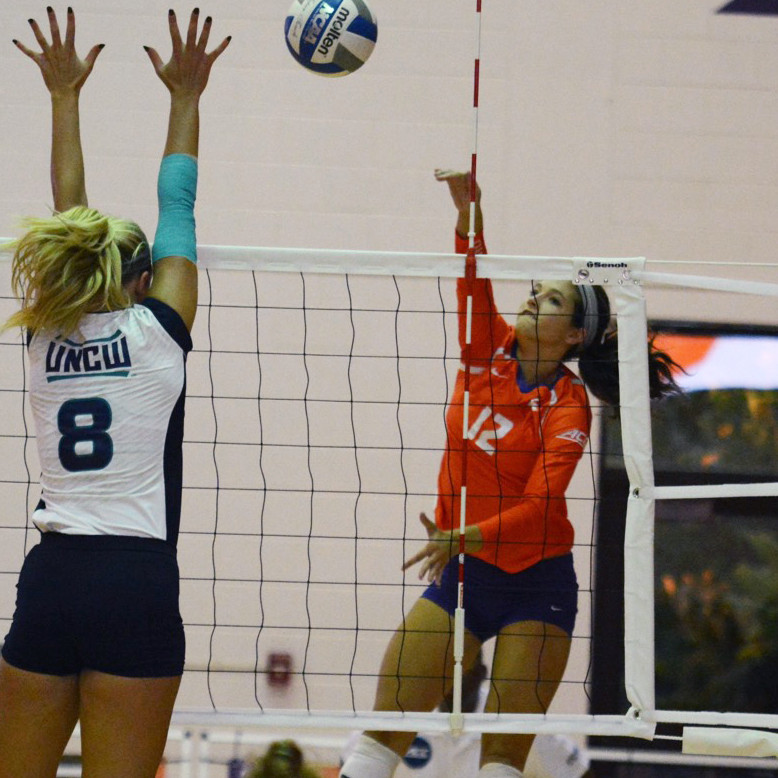 “I thought the crowd lived up to the Jervey hype,” head coach Hugh Hernesman said. “It was fun, they had a lot of energy. It was an exciting match and I thought our players got a good lift from that crowd.”

Three players in particular thrived with the support of the crowd as Kate Federico recorded her first 30-plus assist match to Leah Perri and Kailey Harvell’s benefit.

Perri led the Tigers with 15 kills and was second to Keelie Arneson in digs with 11 while Arneson was credited with 17 as the libero. Harvell shined in her collegiate debut, recording 14 kills and nine digs.

“Kailey was great,” said Hernesman. “You never know what you’re going to get out of freshmen in the beginning of the season but for her to do what she did in her first match was impressive.”

“She’s very level, you don’t see a lot of emotion out of her. She’ll crush a ball, come down and it’ll be the same reaction as when she has an error and I really like that about her.”

Federico tallied a total of 31 assists on the night while recording four kills as well.

“Kate’s a smart setter,” Hernesman said. “She knows where to go to get kills so those two (Perri and Harvell) got a lot of balls tonight and I thought they did a nice job.”

“To have her (Federico) and that experience it means a lot. But honestly, Kate is still learning. She’s such a talented player and she has all these accolades and I think sometimes people forget that she’s still a sophomore. So she’s still learning the game at this level and how to balance out that offense and who to go to in situations and that’ll get better and better as we secure and cement our lineup and as we start expanding our offense.”

The story of the match however was the second set that ended in a 31-29 score in favor of UNC Wilmington. In the second set alone there were eight lead changes and 17 tie scores.