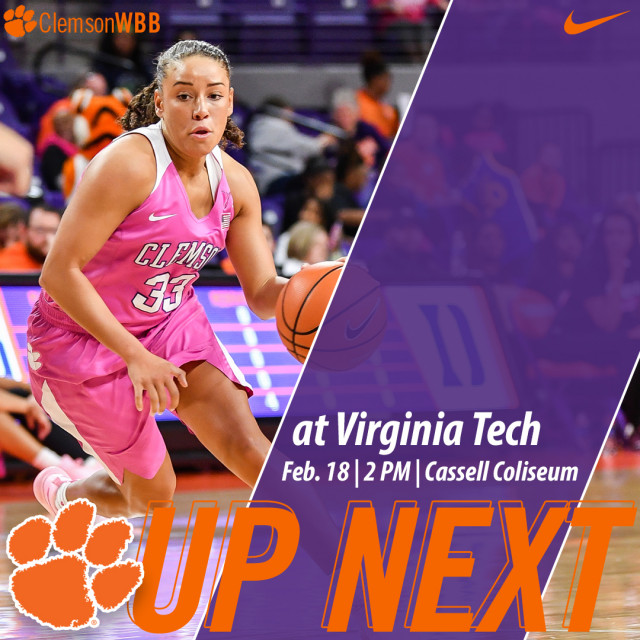 – Clemson leads the ACC and ranks 43rd in the nation in three-point field goal percentage defense, holding its opponents to just 28.7% from behind the arc on the season. The Tigers are fifth in the conference in scoring defense (60.5).

– In a road game on Feb. 7, the Tigers held No. 4/4 Louisville to 14 points below its season average, ultimately falling 65-46 to the Cards. It was only the fourth time this season Louisville has been held to 65 points or less.

– As a team, the Tigers rank third in the ACC in blocked shots (133) and blocked shots per game (4.9). The total blocked shots figure ranks 24th in the nation, while the per-game figure is 33rd nationally.

– During the nonconference season, the Tigers won their Big Ten/ACC Challenge matchup, defeating Nebraska on the road by a score of 67-66 on Nov. 30. The Cornhuskers are now 19-7 overall, 10-3 in the Big Ten and receiving votes in this week’s AP poll. In that game, junior Danielle Edwards scored a career-high 33 points in the game, shooting 9-for-15 (60%) from field goal range, 5-for-9 (55.6%) from three-point range and a perfect 10-for-10 from the free throw line.

– Sophomore Kobi Thornton leads the Tigers in scoring overall and in ACC play. The 2017 ACC All-Freshman Team selection is averaging 10.7 points per game on the season, and 12.7 points per game through 14 conference games. She has scored in double figures in 10 of the Tigers’ 14 ACC games.

– Edwards’ 69 steals and 2.6 steals per game rank third among all ACC players, and the 69 steals also put her at 29th in the nation in that category. On Nov. 13, 2017, Edwards posted nine steals in the Tigers’ 56-48 win over South Carolina State, tying the Clemson record for steals in a single game. Four different players have recorded nine steals in a game previously for the Tigers, however, it had not been done in 30 years, when Ramona O’Neil picked up nine steals against Virginia on Feb. 14, 1987.

– Clemson has a narrow advantage in the all-time series against Virginia Tech, with an 11-10 overall record.

– The Tigers avenged the loss in the first round of the 2017 ACC Tournament, defeating Virginia Tech 67-66 on March 1 in Conway, S.C. Once again, Edwards led the Tigers, with 17 points, seven rebounds, four steals and three assists. Nelly Perry, who is redshirting the 2017-18 season due to injury, added 16 points and eight rebounds. Thornton and Collier were also in double figures in scoring, with 13 and 10 points, respectively.