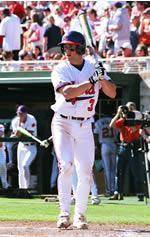 Clemson vs. Elon Clemson (25-16) will play host to Elon (26-17) Tuesday at Doug Kingsmore Stadium. First pitch is scheduled for 7:15 PM. The game will be broadcast live on the radio by WCCP (104.9 FM) out of Clemson. Live stats will be available online at ClemsonTigers.com as well.

Head Coach Jack Leggett is 2-3 against Elon while at Clemson and was 1-3 while at Western Carolina, therefore is 3-6 all-time against the Phoenix.

The Starting Pitchers Elon will start junior righthander Kory Radford (0-0, 4.02 ERA) on the mound Tuesday. The Asheville, NC native has made one start and nine relief appearances for a total of 15.2 innings pitched. He has allowed 19 hits and seven walks while striking out 11. Radford has also yet to allow a home run this season.

Clemson will counter with freshman righthander David Kopp (2-3, 4.39 ERA) on Tuesday. The Margate, FL native has made five starts and eight relief appearances for a total of 41.0 innings pitched. He has yielded 37 hits and 13 walks while striking out 27.

The Phoenix Elon, led by ninth-year Head Coach Mike Kennedy, enters Tuesday’s game with a 26-17 overall record and 15-9 mark in the Southern Conference after sweeping UNC Greensboro over the weekend. The Phoenix is also 7-13 on the road this season.

The team is hitting .297 and has a .399 on-base percentage. Elon is led by Chris Price’s .389 batting average. Price also has an impressive .511 on-base percentage thanks to 36 walks. Drew Davis is hitting .348, while Evan Erickson is hitting .321 with seven homers and 44 RBIs. Elon has stolen 47 bases, including 12 by Paul Bennett and 10 by Gary Morris. An Elon batter has been plunked by a pitch an incredible 82 times this season, including 20 by Morris and 14 by Erickson. The team is averaging 6.3 free passes (walks and hit-by-pitches) per game.

The Tigers are hitting .306 as a team after hitting .351 in five games last week. The team has been especially effective with runners in scoring position, hitting .341 in that situation. Meanwhile, the pitching staff has allowed only 14 home runs while the offense has hit 46, meaning the team is hitting 3.3 long balls for every one it gives up.

Herman Demmink leads the club with a .371 batting average. Freshmen Brad Chalk (.369) and Taylor Harbin (.353) are next among Tiger leaders in batting average. Harbin has hit 18 doubles, two triples, and nine homers along with a team-best 47 RBIs in 41 games. Kris Harvey is hitting .346 with an ACC-best 14 homers (including nine in ACC games) and 45 RBIs. Tyler Colvin is riding a 15-game hitting streak and is hitting .338 overall.

Harbin Goes Off at N.C. State Taylor Harbin became the 11th Tiger in history to hit three homers in a game when he did that at N.C. State on April 23. The freshman second baseman also went 5-for-5 with eight RBIs and a school-record 16 total bases in the Tigers’ 16-9 victory. He broke the old total-base record of 15 that stood for nearly 43 years. Harbin also hit a triple and single, and lacked only a double for the cycle, ironically a category he led the ACC on a per-game basis entering the series.

The Travelers Rest, SC native scored five runs in five plate appearances. He hit a single in the first, a triple in the second, a three-run homer in the fourth, another three-run homer in the sixth, and a solo homer in the eighth. The three long balls came on back-to-back-to-back pitches, as the last two homers came on the first pitch of each at-bat. Harbin became just the fifth Tiger in history to hit three homers in an ACC game and the first since Shane Monahan did it in 1993 at N.C. State. In fact, three of the five three-homer games in ACC contests have taken place at N.C. State’s Doak Field. Harbin’s five hits were a career high as well, as he had not even totaled as many as four prior to the game.

Colvin Riding a 15-Game Hitting Streak Sophomore outfielder Tyler Colvin (North Augusta, SC) was the team’s hottest hitter during the first month of the season, but then his average dipped to .272 in early April. But since then, he has raised his average to .338 thanks to his 15-game hitting streak. During the streak, he is 27-for-62 (.435) with 17 runs scored, 10 doubles, three homers, 19 RBIs, and four stolen bases. He has had at least two hits 10 of the last 12 games. And during the hitting streak, he has struck out just once, that being in the first game of the streak. Therefore in the last 14 games (59 at-bats), he has not struck out.

Another reason for the lefthanded batter’s surge has been his ability to hit lefthanded pitchers. He is 20-for-46 (.435) against lefties this year. In his freshman season of 2004, he was just 1-for-14 (.071), so that area has been a key to his improvement. Colvin is also hitting .379 with runners in scoring position this year.

Colvin Doubling His Game Colvin, who received the 2005 Bob Bradley Award for being the Tigers’ MVP in the four-game series against South Carolina, has hit 18 doubles in 40 games this year, or 0.45 doubles per game. That mark is second in the ACC on a per-game basis. In his first 20 games of 2005, he hit just four doubles. But in the last 20 games, he has hit 14 doubles.

Wolfpacks Take Series Over Tigers N.C. State won two of three games over the Tigers in a series at Doak Field from April 22-24 despite Clemson outscoring the Wolfpack by a combined score of 27-26. After convincing wins by each team in the first two games, N.C. State won a one-run game in the series finale. Clemson hit .330 in the series along with totaling four doubles, two triples, and seven home runs, good for a .583 slugging percentage. Tyler Colvin went 7-for-12 with three doubles and six RBIs, while Herman Demmink was 8-for-16 with four runs scored. Colvin also extended his hitting streak to 15 games. The Tigers were hurt by 16 walks allowed, while N.C. State pitchers walked just five.

In game one, N.C. State pounded out 16 hits, including seven doubles, to down Clemson 8-3 on April 22. Demmink had three of the Tigers’ seven hits, while Kris Harvey, who suffered only his third career loss, added two hits, including a two-run homer. Aaron Bates was 4-for-4 with two doubles to lead the Wolfpack, while Ramon Corona and Jonathan Diaz each had two doubles, a single, and two RBIs. N.C. State’s win snapped the Tigers’ five-game winning streak in the series.

In game two, Taylor Harbin totaled three homers, eight RBIs, and a school-record 16 total bases in Clemson’s 16-9 win over N.C. State on April 23. Harbin also went 5-for-5 with a triple and a single, and became the 11th Tiger to hit three homers in a game. His three homers came on back-to-back-to-back pitches, as his last two long balls came on the first pitch of each at-bat. Two of the homers were three-run shots, as he only lacked a double for the cycle. Clemson had 17 hits in all, including three by Demmink, and two each by Colvin, Stan Widmann, and Adrian Casanova. Widmann and Casanova also hit homers. Robert Rohrbaugh did not allow a hit in his final 5.0 innings pitched to get the win.

In game three, Aaron Cone hit a walkoff single off the left-field wall to give N.C. State a 9-8 win on April 24. N.C. State took a one-run lead in the eighth inning thanks to a throwing error on a potential double-play ball. But Colvin tied the score in the ninth with his third double of the game. Colvin became just the second Tiger to ever have multiple three-double games, as he did it last year against Florida State. He also was 4-for-5 with three RBIs. Harvey added a three-run homer, as the Tigers out-hit the Wolfpack 14-12.