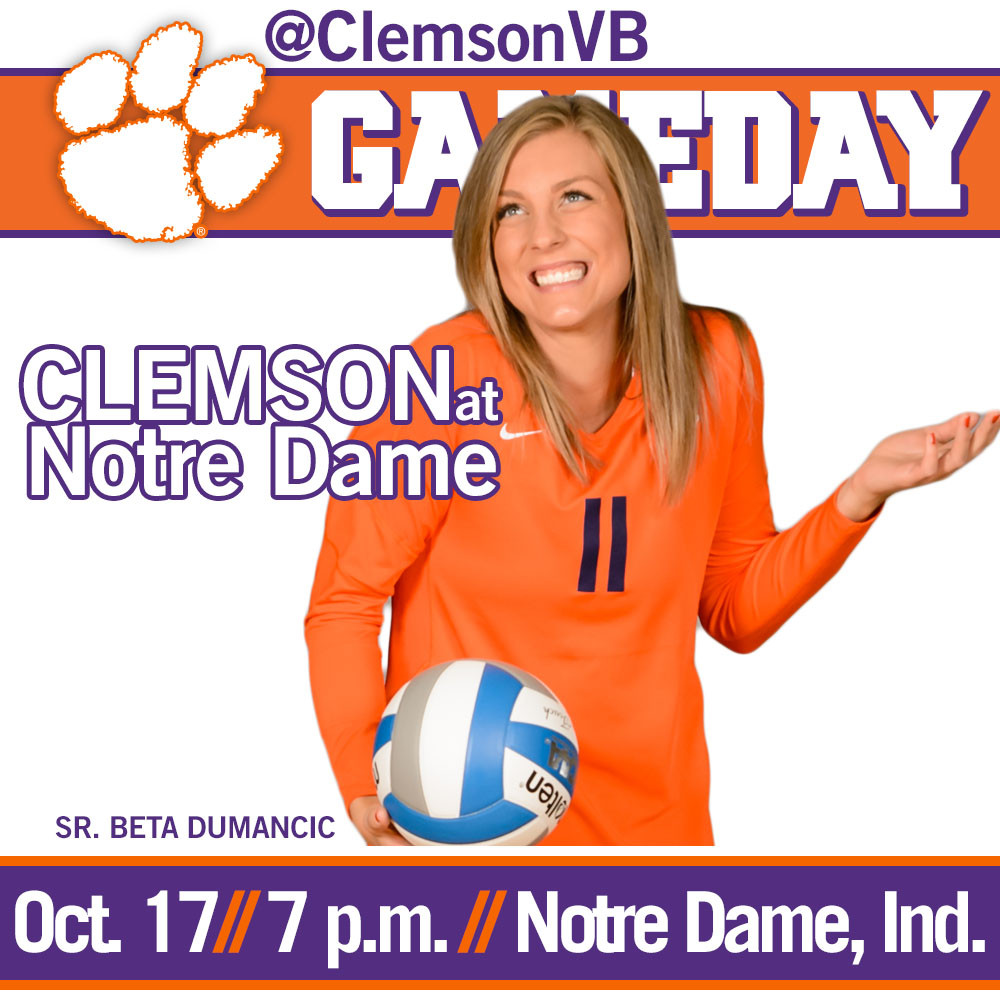 CLEMSON, S.C. – The Clemson volleyball team travels to Notre Dame, Ind. on Friday, Oct. 17 to take on the Fighting Irish in just the fifth match-up ever between the two teams on the volleyball court. First serve is set for 7 p.m. at the Joyce Center.

The Tigers are 13-5 overall in 2014, with a 2-3 mark in conference play after defeating Virginia Tech (3-2) and Georgia Tech (3-1) in Jervey Gym last Friday and Sunday, respectively. Freshman setter Kate Federico earned ACC Rookie of the Week honors for her performance in the two matches, tallying 90 assists for a 10.0 per set average. Graduate student Haleigh Hampton posted a Clemson-career-best 20 kills in the win over the Hokies.

Clemson ranks second in the ACC and 20th in the nation in opponent team hitting percentage (.150).  The Tigers are also fourth in the conference and 16th in the nation in team blocks per set (2.84). Senior Kristin Faust continues to lead the Tigers in kills per set (3.55), which ranks 10th among all conference players, and is second on the team in digs per set with (2.66). Senior Niki Collier, the team leader in digs per set with 3.25, finds herself just outside of the top 10 in the ACC statistical rankings.

Karis Watson ranks second in the ACC and is tied for 12th in the nation in blocks per set (1.46). In addition to leading the Tigers in blocking, she also has a team-best .347 hitting percentage, which places her ninth in the league.

Federico continues to climb the charts at Clemson, with 672 assists for the season. She is now just 80 assists away from tying Hannah Brenner’s 752, which ranks fourth in terms of assists in a single season by a Tiger freshman.  Her 9.88 assists per set rank fifth in the ACC.  Federico is also the team leader in service aces with 22.

The Fighting Irish 4-13 overall and 1-5 in ACC play, and are coming off 3-0 losses to Pittsburgh and Louisville on the road last weekend. Notre Dame is led on offense by Nicole Smith (2.74 kills per set), while Natalie Johnson leads the team in digs per set (3.36) and services aces (12). Sam Fry averages 1.12 blocks per set.

Clemson and Notre Dame have met just four times, with each team winning two matches. The Tigers are 2-0 against the Irish in Jervey Gym, but have a 0-1 record at Notre Dame and a 0-1 record in a neutral setting. Last season, Clemson defeated the Irish 3-0 on Oct. 11 in Jervey Gym. Faust recorded a double-double in the match with 12 kills and a match-high 13 digs.