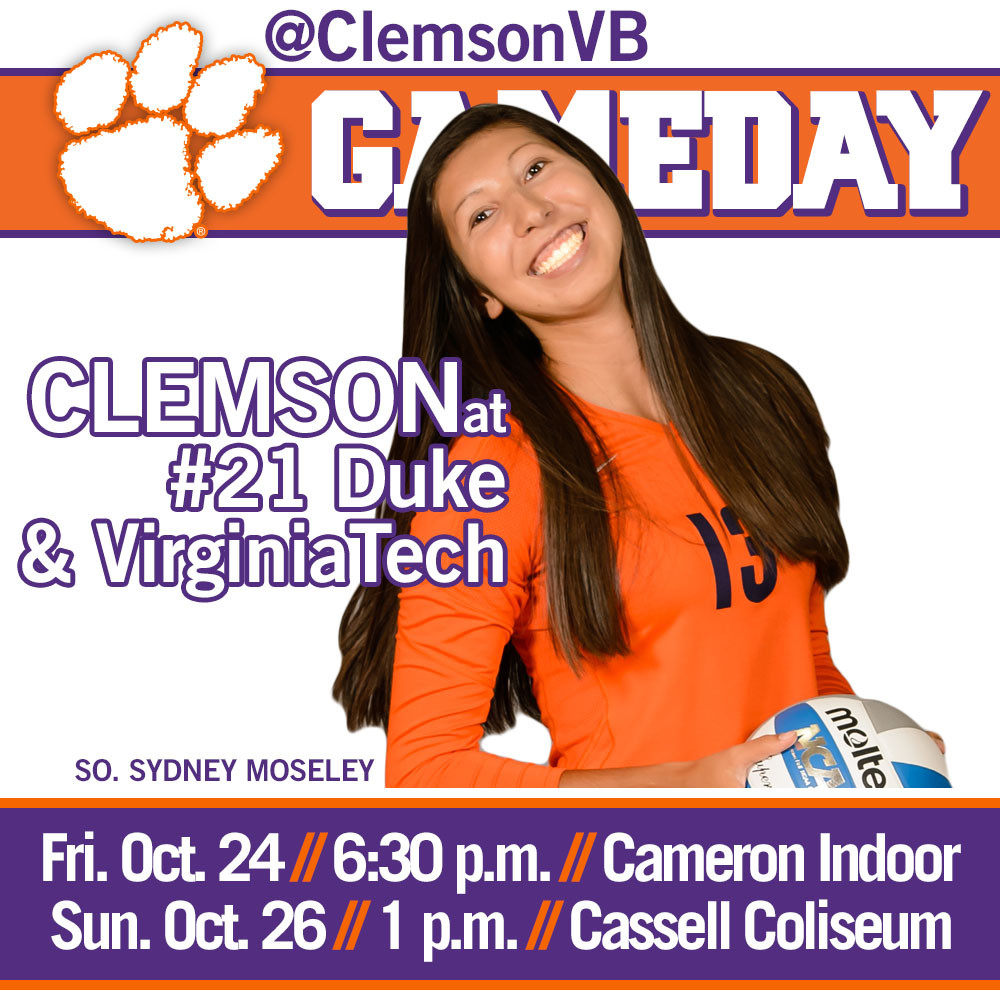 CLEMSON, S.C. – The Clemson volleyball team hits the road for two matches this weekend as they travel to Durham, N.C. and Blacksburg, Va. On Friday, Oct. 24, the Tigers face 21st-ranked Duke at 6:30 p.m., before traveling to Blacksburg to take on the Hokies on Sunday, Oct. 26 at 1 p.m. Live video will be available for both matches, on GoDuke.com (subscription required) and HokieSports.com.

The Tigers are 14-6 overall and 3-4 in the ACC, and sit in eighth place in the league standings, after defeating Notre Dame 3-0 on the road and falling to Pittsburgh 3-1 at home last weekend. The win over the Irish was the 800th win in program history, and Clemson is now the sixth conference school to reach the milestone. The Tigers enter the week ranked second in the ACC and 23rd in the nation in opponent hitting percentage (.153). The team tallied 29 blocks in seven sets played over the weekend, raising its season average by 0.12 per set. The current average of 4.14 blocks per set puts the Tigers second in the ACC and 10th in the country in that category.

Senior Kristin Faust leads Clemson in kills (249) and kills per set (3.51), which ranks eighth in the ACC. Faust has also accumulated the most points on the team with 282.0. Sophomore Leah Perri ranks second on the team in all three categories (220, 2.93, 232.5). Freshman setter Kate Federico is now up to 730 assists on the season and her average of 9.73 assists per set is fifth in the conference.  She needs just 23 assists to move into fourth place in Clemson record books in terms of single season assists by a freshman.

Karis Watson raised her blocks per set average to 1.48 over the weekend, which elevates the senior to first in the ACC and seventh in the nation. If Watson is able to maintain her current blocking average, she will finish inside the top 10 for a single season in school history.  Beta Dumancic is second on the team in blocks with 1.24 per set, which ranks eighth in the ACC statistical rankings. Senior libero Niki Collier leads the Tigers in backcourt defense, averaging 3.28 digs per set.

Duke (15-4, 7-1 ACC) is currently ranked 21st according to the American Volleyball Coaches Association poll released on Oct. 20, and sits in second place in the conference standings entering the weekend. The Blue Devils have two players listed in the top 10 in the ACC in kills per set average, Emily Sklar (fourth with 4.02) and Jeme Obeime (10th with 3.37). Setter Kelsey Williams’ 11.61 assists per set average is first in the league and seventh in the nation. Sasha Karelov leads the ACC with 5.34 digs per set, which ranks 16th in the country.

The Tigers and Blue Devils have met 59 times on the volleyball court. Clemson has a 23-36 record against the Blue Devils all-time, including a 7-19 record in Durham. Over the last five seasons, Clemson and Duke have played seven times, with the Blue Devils winning four, including a 3-1 win in last season’s meeting in Jervey Gym, in which Duke was ranked 24th nationally.

Virginia Tech has an overall record of 8-12 and a 1-6 mark in ACC play, and is currently 14th in the ACC standings. Lindsey Owens leads the Hokies with 3.30 kills per set. Jordan Fish and Kyra Coundourides have 6.33 and 4.63 assists per set, respectively, on the season. Ashley Battle is first on the team in blocks per set (1.08) and Megan Beckwith leads in digs per set (3.28).

The Tigers boast a 16-8 all-time against the Hokies, but are 3-6 in matches played in Blacksburg.  Clemson is 6-1 against Virginia Tech since 2010 and has won four in a row, including a five-set come-from-behind victory earlier this season, on Oct. 10 in Jervey Gym. Graduate Haleigh Hampton led the Tigers in the match, posting 20 kills, while Dumancic and Watson tallied six blocks apiece to lead the team to 14.0 blocks in the contest.