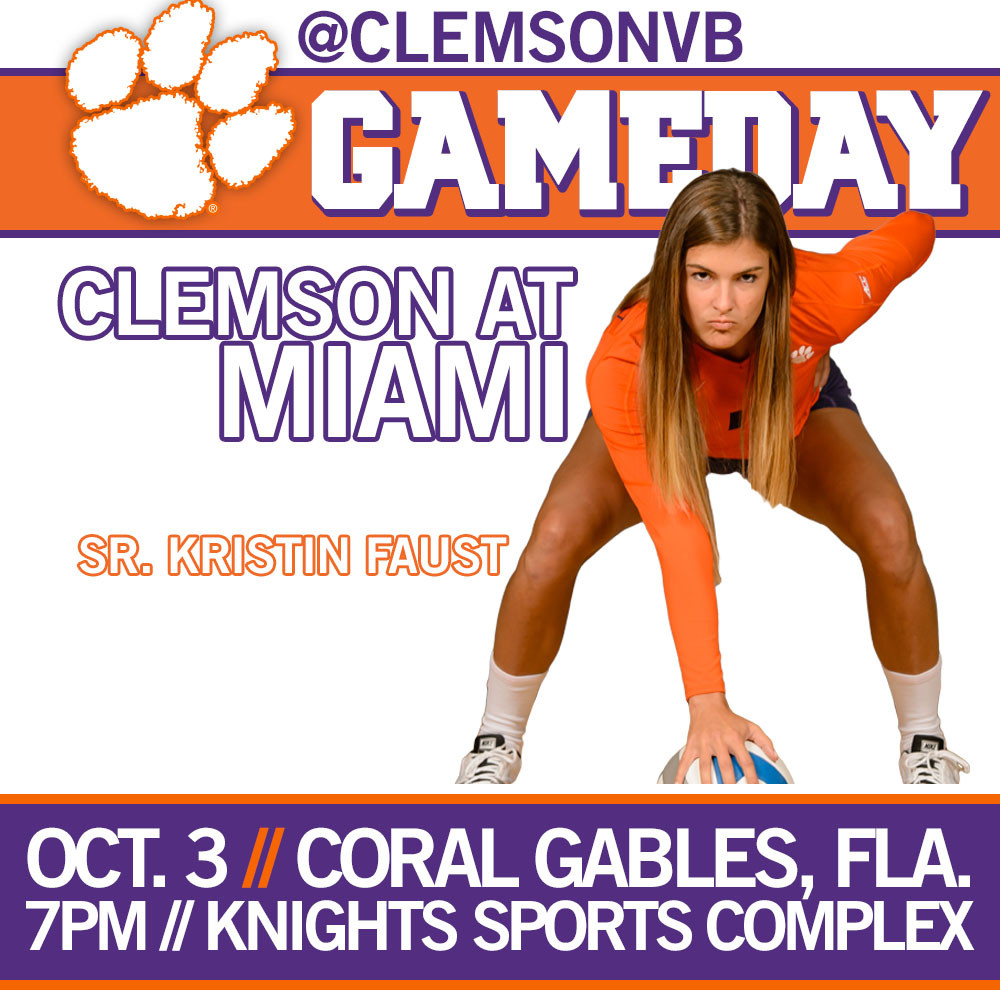 CLEMSON, S.C. – The Clemson volleyball team travels to Coral Gables, Fla. on Friday, Oct. 3 to face the University of Miami Hurricanes. The match is scheduled to start at 7 p.m. at Knights Sports Complex.

Clemson is 11-3 on the season and 0-1 in Atlantic Coast Conference play, and is coming off of a tough 3-1 loss to Virginia in its conference opener last Friday in Charlottesville. Freshman setter Kate Federico had a productive match with 38 assists, eight digs, seven kills and two service aces, while sophomore outside hitter Leah Perri added 12 kills and seven digs to the Tiger effort.

On the season, senior Kristin Faust (3.71) and Perri (3.13) lead the team in kills per set.  Senior Karis Watson still leads the team in blocks, and her 1.52 per set figure ranks third in the ACC and is tied for 14th in the nation. Graduate Haleigh Hampton and senior Beta Dumancic each average 1.15 blocks per set, which puts them in a tie for ninth in the conference statistical standings. Federico continues to climb the Clemson record books in terms of freshman assists with 519 on the season (9.98 per set), and is now just 233 assists away from fourth in program history. Senior Niki Collier leads the Tigers in service aces (17) and digs (3.21) per set.

Miami is 8-5 on the season (1-1 ACC) following a 3-0 loss to Duke last Sunday. The Hurricanes are led in kills by Savanah Leaf, with 189 kills on the season, 91 more than her next closest teammate. She averages 4.30 per set, which is tied for 24th in the country. Emani Sims leads the Canes in blocks, averaging 1.13 per set, while Kalysta White leads in digs with 3.34 per set and Haley Templeton leads in assists with 10.52 per set.

The Tigers and Hurricanes have met on the volleyball court 20 times between 1980 and 2013. Clemson holds and 11-9 all-time advantage in the series, and a 6-4 advantage since Miami joined the ACC in 2004. The Tigers won the first six matches between the conference foes, but the Hurricanes have won the last four. Miami holds a 5-3 advantage in matches played in Coral Gables.