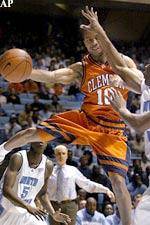 CHAPEL HILL, N.C. – Clemson found yet another way to lose in Chapel Hill.

Rashad McCants, who sat out nearly 10 minutes of the second half with foul trouble, scored eight of his 20 points over the final 3:34 as North Carolina beat the Tigers 68-66 Tuesday – running Clemson’s all-time record to 0-49 here.

Raymond Felton, battling an upset stomach most of the game, was also a hero for the Tar Heels (10-5, 2-1 ACC), sinking two free throws with 21.9 seconds left and North Carolina clinging to a one-point lead.

The Tar Heels trailed 49-43 with 13:44 left after blowing a 15-point first-half lead, but Jawad Williams made three straight shots over a span of 1:13 to get North Carolina and its crowd back in it.

McCants then took over, breaking a 56-56 tie with a 3-pointer. He made another shot behind the arc about a minute later and a follow shot with 1:56 left to put the Tar Heels up 64-60.

The Tigers (10-2, 0-2) pulled within one before Felton, who added eight assists and six rebounds, helped seal it from the foul line.

Clemson still had a chance to tie it with a 3-pointer, but Ed Scott’s long shot was an air ball as he was being hawked by Jackie Manuel. North Carolina grabbed the rebound and Williams, who added a season-high 19 points, sealed it with a layup.

Scott led the Tigers with 17 points, while Sharrod Ford added 10 points and 11 rebounds.

North Carolina’s home-court winning streak over Clemson is the second-longest in NCAA history. Princeton’s 52-game streak over Brown is also active and the longest.

Clemson’s only game out of the state of South Carolina before playing the Tar Heels came on Nov. 27 against High Point at the Greensboro Coliseum – a neutral site.

This one started like most of Clemson’s games in Chapel Hill – with the Tigers falling into an early hole.

Felton’s fourth 3-pointer of the half with 8:17 left gave the Tar Heels a 15-point lead and it looked as if this was going to be another easy win for North Carolina here.

But Felton left with an upset stomach and McCants picked up his third foul – and that’s the crack Clemson needed to get back into it.

Scott started a 20-4 run with seven points in a two-minute span as the Tigers managed a 38-38 tie at the break, shooting 52 percent and beating North Carolina on the boards.