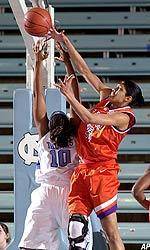 Candace Sutton added a season-high 18 points and Nikita Bell had 15 points and eight steals for the Tar Heels (23-2, 12-1 Atlantic Coast Conference), who won their eighth straight league game and fourth in a row against the Tigers (12-11, 4-8).

The Tar Heels held the Tigers without a field goal for the next 10˝ minutes.

Still, Clemson rallied late, scoring eight unanswered points to pull within three. The Tigers had three chances to tie it in the final 80 seconds, but couldn’t overtake the Tar Heels.

Both teams shot 50 percent in the first half and went into halftime tied at 42.

The Tigers dominated the boards, outrebounding North Carolina 48-35 behind Tia Andrew’s 12 rebounds. The Tar Heels had been outrebounded only twice this season.